As a weakened Typhoon Hagupit continues to sweep across the Philippines, United Nations agencies are quickly responding to the needs of the local population by providing critical life-saving supplies, the Organization announced today as it also applauded the Filipino Government for its swift and efficient first-response efforts which, it said, had saved many lives.

Hagupit made landfall over the weekend battering the Philippines’ Dolores municipality with high winds and lashing rains, resurrecting fears of a repeat of the devastation caused by last year’s Typhoon Haiyan. As the weekend progressed, however, the slow-moving typhoon was downgraded to a tropical storm amid moderate to heavy rains, according to the UN Office for the Coordination of Humanitarian Affairs (OCHA) in its latest situation report.

Lotta Sylwander, the Philippines Representative of the UN Children’s Fund (UNICEF), cautioned that despite its downgraded status the storm continued to pose “a serious threat” as tens of thousands of children and their mothers remained in “urgent need of emergency aid.”

“The Government’s swift evacuation response has saved many from injury and even death,” Ms. Sylwander said in a press release, “but there are still almost a million people – many still recovering from Haiyan – who have been driven from their homes.”

“These people have made enormous progress in rebuilding their lives over the last 12 months, and they need our help to make sure these hard-won gains are not washed away by this new disaster.”

UNICEF’s Tacloban office, established after Super Typhoon Haiyan struck the archipelagic nation in November 2013, activated its emergency response plan last week with 54 staff remaining on standby to deploy to affected areas. Among the most pressing threats to children’s health, the UN agency explained, were poor sanitation and unclean water meaning that a restoration of existing water sources is considered a “top priority in the critical days after the storm.”

The agency added that it had strategically prepositioned supplies in warehouses in Tacloban, Manila and Cotabato, including water kits, hygiene kits, water pumps, generators, water storage and treatment facilities as well as nutritional therapeutic food items to combat malnutrition, oral rehydration salts and tarpaulins power for at least 12,000 families.

Although the full extent of the damage continues to remain unclear in certain provinces due to poor communication, the number of reported casualties appears to be relatively low with media sources citing 21 deaths compared to the more than 6,000 killed by Typhoon Haiyan.

In a press release, the UN Office for Disaster Risk Reduction (UNISDR) lauded the steps taken by authorities to reduce fatalities caused by the storm, adding that all arms of the Filipino Government had “pulled together to save lives and minimize the damage being inflicted by this disaster event.”

“UNISDR believes that the Philippines government has done an excellent job of putting into action the lessons learned from Typhoon Haiyan,” declared UNISDR head, Margareta Wahlström.

“We have been telling this story since the Indian Ocean tsunami ten years ago that nations and communities have the power to reduce their losses if they are well-organized, understand the nature of risk and develop the capacity to deliver early warnings and evacuate groups at risk ahead of the disaster event.” 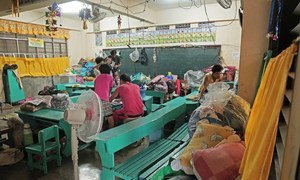 ‘We will provide whatever is needed,’ UN pledges response to Philippines typhoon

The United World Food Programme (WFP) announced today that it is “working flat-out” to support the Philippines Government's humanitarian response to Typhoon Hagupit which could impact more than 30 million people.