More people are risking their lives to cross the Indian Ocean on smuggler’s boats despite the great risks involved, including the prospect of “horrific violence,” the United Nations refugee agency warned today.

Speaking at a press briefing in Geneva, William Spindler, a spokesperson for the Office of the UN High Commissioner for Refugees (UNHCR), told reporters that an estimated 54,000 people had undertaken irregular maritime journeys in the Southeast Asian region of the Indian Ocean, including some 53,000 people leaving from the Bay of Bengal towards Thailand and Malaysia.

According to UNHCR, in fact, an estimated total of 120,000 people are believed to have embarked on these clandestine journeys across the Bay of Bengal since the beginning of 2012, with payments ranging from $1,600 to $2,400 per passenger. As a result of the frequency and cost of the journey, smugglers have managed to generate nearly $250 million in revenue in the last three years alone.

“The outflow from the Bay of Bengal tended to peak in October, when calmer waters followed the end of the rainy season,” Mr. Spindler explained. “Departures this October surged more than in previous years.”

The spokesperson added that some 21,000 Rohingya and Bangladeshis had set sail since then – a 37 per cent increase over the same period last year. About 10 per cent were believed to be women while approximately a third of arrivals interviewed by UNHCR in Thailand and Malaysia were minors under the age of 18.

Mr. Spindler suggested that the uptick in numbers were caused by current conditions in Myanmar where ethnic tensions and conflict could be driving Rohingya, an ethnic minority group, to leave the country.

Meanwhile, he continued, the majority of people who made the crossings were initially charged very little by the smugglers who, upon arrival at their destination, would then hold them against their will until the families paid money for their release. In many cases, the migrants are held in dire conditions, suffering beatings, torture and rape. Once the migrants are released, they still face potential detention from the local authorities, clandestine living within the host country, or even deportation to their country of origin.

“It is a very concerning situation,” Mr. Spindler said. 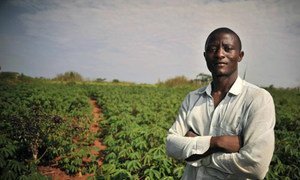 If countries of the Mediterranean want to stem the tide on forced migration and human suffering, they must put agricultural, food and rural development, including youth-targeted incentives, at the core of regional cooperation, said the head of the United Nations Food and Agriculture Organization (FAO) today.