The first UNEP Adaptation Gap Report finds that even if global greenhouse gas emissions are cut to the level required to keep temperature rise below 2°C, the cost of climate change adaptation in developing countries is likely to reach two to three times the previous estimates of $70-100 billion per year by 2050.

“Debating the economics of our response to climate change must become more honest,” said UNEP Executive Director Achim Steiner in a press release on the challenges ahead, released as the first week of UN climate talks in Lima, Peru wrap up. That conference is set to conclude its work on 12 December.

“As world leaders meet in Lima to take the critical next step in realizing a global agreement on climate change, this report underlines the importance of including comprehensive adaptation plans in the agreement.”

The report assesses global adaptation gaps in finance, technology and knowledge, and lays out a framework for future work to better define and bridge those gaps. It calls for further action to cut emissions to prevent adaptation costs from soaring as wider and more-expensive action is needed to protect communities from the intensifying impacts of climate change.

“The impacts of climate change are already beginning to be factored into the budgets of national and local authorities,” Mr. Steiner added, stressing the particular need to address the implications of climate change on least developed countries.

He called on Governments to address the gaps in funding, technology and knowledge in future planning and budgeting and said the report was a “powerful reminder” that the potential cost of inaction carries a real price tag.

To keep temperature rise within the necessary limits, UNEP’s Emissions Gap Report 2014 found that global carbon neutrality should be attained by mid-to-late century. Business as usual could lead to a rise far beyond the safe limits, potentially the spending needed for adaptation in the worst-case figures.

The report expands on the UN Intergovernmental Panel on Climate Change’s (IPCC) Fifth Assessment Report, which estimated the cost of climate change adaptation in developing countries at $70-100 billion per year by 2050. The new report estimates the figure for 2050 as high as $250-500 billion per year, based on the assumption that emissions are cut to the targets required to limit global temperature rises. 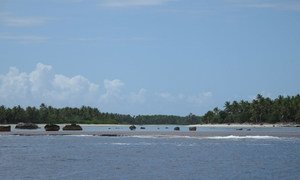 While the world is on track to meet a 2020 target on the expansion of protected areas, more work is needed to ensure areas of importance for biodiversity and ecosystem services are prioritized for protection under equitably managed conditions, according to a new United Nations Environment Programme (UNEP) report released today.