World Bank/Lakshman Nadaraja
Working alongside her male team member, a female employee checks the quality of work at a dam under construction in Sri Lanka.
5 December 2014

“Wage growth has slowed to almost zero for the developed economies as a group in the last two years, with actual declines in wages in some,” said Sandra Polaski, the ILO’s Deputy Director-General for Policy.

“This has weighed on overall economic performance, leading to sluggish household demand in most of these economies and the increasing risk of deflation in the Eurozone,” she added.

In developing countries, major differences between regions were recorded, with 6.0 per cent growth in Asia and 5.8 per cent in Eastern Europe and Central Asia but only 0.8 per cent in Latin America and the Caribbean. Incomplete data for Africa shows wage growth there reaching only 0.9 per cent.

The report analyzes wage inequality and its effects on income inequality, noting a mixture of recent trends, but concluding that in a majority of countries where inequality has increased, such as in the United States or in Spain, changes in wages and employment have been the dominant force.

“In many countries, inequality starts in the labour market, and particularly in the distribution of wages and employment,” said Rosalia Vazquez-Alvarez, econometrician and wage specialist at the ILO, also an author of the report.

Where inequality has been reduced, as in Brazil, Argentina and the Russian Federation, wages and increased employment have been the driving force.

Another contribution to inequality was wage gaps that stemmed from discrimination. For groups like women, migrants and workers in the informal economy, gaps exist that are not associated with observable characteristics, like education or experience, which normally explain wage differences between individuals.

“Because overall inequality is driven significantly by wage inequality, labour market policies are needed to address it,” said Ms. Polaski, adding that fiscal redistribution mechanisms, including taxes and social protection policies, while part of the solution could not bear the full burden of addressing inequality.

“A comprehensive strategy will include minimum wage policies, strengthened collective bargaining, elimination of discrimination against vulnerable groups, as well as progressive taxation polices and adequate social protection systems,” she said.

The report also called for coordinated strategies at the international level, urging States not to try to increase exports by repressing wages or reducing social benefits, as they could feed a serious contraction of output and trade. 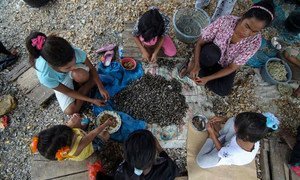 While the majority of countries around the world are expected to cut public expenditures in 2015 and beyond, others will be moving in the opposite direction to expand social protection measures, says a new policy paper released by the International Labour Organization (ILO) today.