3 December 2014
More than half-way through an international campaign to end violence against women, a top United Nations expert on the issue is calling for a binding international legal standard that holds Member States accountable in fighting this widespread human rights violation.

According to UN estimates, one in three women worldwide is a victim of violence.

“The time has come to move beyond awareness-raising campaigns and the highlighting of statistics,” she urged.

The absence of a legally binding agreement at the international level is one of gravest obstacles to the promotion and protection of women’s rights and gender equality.

Last week, the UN commemorated the International Day for the Elimination of Violence against Women, which was also the start of a 16-days-of-activism.

The Orange Your Neighbourhood campaign is a global call of action to end violence against women, critical for women’s participation in political, economic, civil and cultural spheres of their communities. The campaign runs through 10 December, which marks the annual global celebration on Human Rights Day.

In spite of the significant milestones achieved in advancing women’s rights and gender equality, at the national, regional and international levels, Ms. Manjoo highlighted the continuing and new sets of challenges that hamper efforts to promote and protect the human rights of women.

“Transformative change requires that the words and actions of States’ reflect an acknowledgement that violence against women is a human rights violation, in and of itself.”

A different set of legally binding standards with a specific monitoring body negotiated by all UN Member States is urgently needed to ensure effective examination and accountability of States’ responses to the systemic and pervasive human rights violation experienced largely by women and girls.

“Violence against women has to be acknowledged as a barrier to the realization of all human rights, and consequently to the effective exercise of citizenship rights,” Ms. Manjoo said.

The international community must adopt a “holistic approach that addresses individual, institutional and structural factors that are a cause and a consequence of violence against women.”

Ms. Manjoo also mentioned her latest reports presented to the UN Human Rights Council and General Assembly recently, calling for the adoption of different norms and measures to fight violence against women.

“I will continue to raise the matter of the normative gap under international law as regards violence against women,” she pledged. 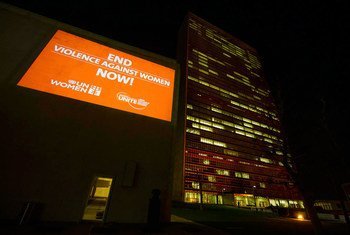 24 November 2014
Tonight, for the first time ever, both the iconic United Nations Headquarters complex and the Empire State Building in New York are bathed in orange light to kick off the “Orange YOUR Neighbourhood” campaign ahead of the International Day to End Violence Against Women.