“What we saw in 2014 is consistent with what we expect from a changing climate,” WMO Secretary-General Michel Jarraud explained today in a press release. “Record-breaking heat combined with torrential rainfall and floods destroyed livelihoods and ruined lives. What is particularly unusual and alarming this year are the high temperatures of vast areas of the ocean surface, including in the northern hemisphere.”

High sea temperatures, the UN agency said, have contributed to exceptionally heavy rainfall and floods in many countries and extreme drought in others. Twelve major Atlantic storms battered the United Kingdom in early months of 2014, while floods devastated much of the Balkans throughout May. The monthly precipitation over the Pacific side of western Japan for August 2014, meanwhile, was 301 per cent above normal – the highest since area-averaged statistics began in 1946.

At the same time, crippling droughts have struck large swathes of the continental United States while Northeast China and parts of the Yellow River basin did not reach half of the summer average, causing severe drought.

Adopting an alarming tone, the WMO press release noted that fourteen of the fifteen warmest years on record have all occurred in the 21st century. If December continues along its current path, it added, then 2014 will likely be the hottest on record, ahead of 2010, 2005, and 1998.

“There is no standstill in global warming,” Mr. Jarraud declared. “Record-high greenhouse gas emissions and associated atmospheric concentrations are committing the planet to a much more uncertain and inhospitable future.” 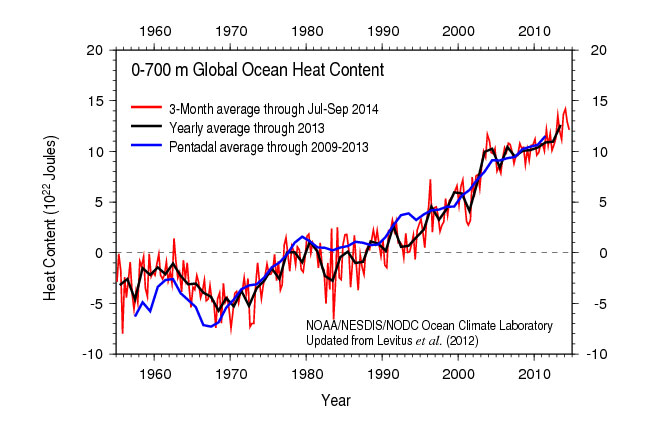 In a message from Lima, Peru, where she is presiding over a critical UN climate conference, Christiana Figueres, the Executive Secretary of the UN Framework Convention on Climate Change (UNFCCC), said that the changing climate would directly impact billions of people around the world as the risks of extreme weather events inevitably grew. But, she added, the international community appeared committed to reverse the damaging effects of climate change and set the world on a more sustainable path towards a safer future.

“Fortunately our political climate is changing too with evidence that governments, supported by investors, business and cities are moving towards a meaningful, universal climate agreement in Paris 2015 – an agreement that keeps a global temperature rise below 2 degrees C by putting in place the pathways to a deep de-carbonisation of the world’s economy and climate neutrality or ‘net zero’ in the second half of the century,” Ms. Figueres stated.

According to the conference’s agenda, countries will put forward what they propose to contribute to the planned 2015 agreement in the form of Intended Nationally Determined Contributions (INDCs) by the first quarter of 2015, in advance of the December 2015 conference scheduled in Paris, France, where the new universal UN-backed treaty on climate change will be adopted.

Over the course of the next two weeks, delegates will attempt to hammer out the new universal treaty, which would enter force by 2020.