UNDP/Morgana Wingard
With the cost of transport and goods going up and sales going down since the Ebola outbreak, vendors in Waterside Market, Monrovia, Liberia, are making no profit to support their families.
2 December 2014

The World Bank announced today that economic growth estimates in the three countries most affected by the Ebola crisis have been revised sharply downward with the impact totalling well over half a billion dollars in 2014, as the United Nations health agency officially declared the outbreak in Spain over.

The UN World Health Organization (WHO) commended Spain on its diligence to end transmission of the virus, and cited measures such as “exhaustive tracing of both high- and low-risk contacts, daily active monitoring of all contacts, training in and monitoring of correct use of personal protective equipment for all healthcare workers caring for the patient infected with Ebola virus.”

Meanwhile, according to an Ebola Economic Impact Update released today by the World Bank Group, the epidemic continues to cripple the economies of Guinea, Liberia, and Sierra Leone, and is projected to result in negative or contracting growth in these countries next year.

“Growth estimates for 2014 in the three affected countries have been revised sharply downward,” the update reported. “With second-round effects and investor aversion, the economies of Sierra Leone and Guinea are expected to shrink in 2015, and Liberia is expected to grow at less than half the pace anticipated before the crisis.”

“The total fiscal impact of the crisis is well over half a billion dollars in 2014 alone,” it said.

This report, which updates the World Bank Group’s October 8 analysis of the economic effects of the crisis on the three hardest-hit countries, was issued as World Bank Group President Jim Yong Kim begins a visit to West Africa to assess the epidemic’s impact and discuss what steps need to be taken to reach the goal of zero cases as soon as possible.

“This report reinforces why zero Ebola cases must be our goal. While there are signs of progress, as long as the epidemic continues, the human and economic impact will only grow more devastating,” said Mr. Kim in a press release. “As we accelerate the immediate health response, the international community must also do everything we can to help the affected countries back on the road to economic recovery and development.”

In other news, WHO spokesman Tarik Jasarevic said that a meeting on building resilient health systems in Ebola affected countries would take place on 10 and 11 December in Geneva.

Later this week at UN Headquarters, the Economic and Social Council (ECOSOC) is convening a special meeting on Friday, 5 December, to discuss in-depth the economic and social impact of Ebola on the affected countries, the region and the rest of the world.

The meeting, to be chaired by the President of ECOSOC, will bring together high-level representatives of Member States, the UN system, the international organizations, civil society, health sector experts, academia and the private sector.

The UN Food and Agriculture Organization (FAO), meanwhile, announced today that Guinea, Liberia and Sierra Leone, will each receive $500,000 to help curb the potentially devastating impact of the disease on food security and on the livelihoods of farmers and others in rural areas. The funds will be used over a 12-month period to assist 7,500 households – about 45,000 people – in the three targeted countries.

The World Bank Group reported that is mobilizing nearly $1 billion in financing for the countries hardest hit by the Ebola crisis. This includes $518 million for the epidemic response, and at least $450 million to enable trade, investment, and employment in Guinea, Liberia, and Sierra Leone. 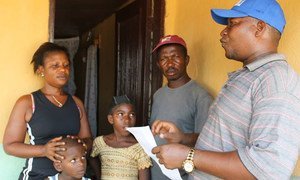 Exceptional efforts to respond to the Ebola outbreak in West Africa are starting to show results, but a more “nimble and flexible” approach will be needed as the outbreak evolves in order to stay ahead of the disease and bring it down to zero, top officials charged with the United Nations response said today.