The United Nations human rights office has voiced great concern over the unfolding events in Egypt, warning that recent developments in the country have spawned dangerous fractures across the spectrum of society, potentially impacting freedoms of expression, association and assembly, and contributing to an increase in reports of human rights violations.

Egypt witnessed an eruption of violence over the weekend pitting demonstrators against security officers following the conclusion of former President Hosni Mubarak’s trial which resulted in all charges being dropped against the deposed leader. At least five people, including two security officers, were reportedly killed in the clashes, drawing the deep concern of the UN’s Office of the High Commissioner for Human Rights (OHCHR) over what it described as “a seriously damaging lack of accountability for human rights violations committed by security forces in the context of demonstrations.”

“The increasing polarization in Egyptian society is very alarming and we urge all sides to engage in a national dialogue to move the country forward in line with the human rights protections enshrined in its constitution and in line with Egypt’s international human rights obligations,” Rupert Colville, OHCHR spokesperson, told reporters in Geneva today.

“We are also closely following attempts to bring to justice those responsible for serious human rights violations in Egypt, including the killings of hundreds of people in February 2011 as well as in August last year,” Mr. Colville continued, referring to the August 2013 crackdown when Egyptian security services used force to clear sit-ins and demonstrations.

“We urge the authorities to ensure that all those who are responsible for human rights violations, up to the highest levels, face justice in line with international standards of fair trial and due process. Victims and their loved ones have the right to justice and accountability and to reparations and compensation.”

The OHCHR spokesperson also noted growing concern over the Government’s clampdown on people expressing their right to free speech and gathering peacefully. Last week, 78 teenagers were sentenced by a court to between two and five years on charges of participating in unauthorised protests, of membership of the Muslim Brotherhood, of calling for the downfall of the regime, and of blocking roads and transportation and “spreading fear among citizens” in the coastal city of Alexandria.

Against this backdrop, Mr. Colville pointed to reports of civilians being tried before military courts following a decree issued in October by President al-Sisi which allows the military to protect “critical and sensitive facilities.” The spokesperson told reporters that military tribunals “generally fall short of key international due process standards” and urged Egyptian authorities to halt the practice. In addition, he noted, the Government’s approval last week of a draft law laying down the offences that qualify an organisation, association, group or band of individuals that can be qualified as “a terrorist entity” had prompted some concerns as well.

Mr. Colville said the UN rights office urged authorities “to immediately release” all those detained for the “legitimate exercise of their rights” and called on legislators to guarantee that the draft law be “thoroughly re-examined to ensure it meets international human rights norms and standards.”

Egypt has witnessed considerable violence since the overthrow of Hosni Mubarak three years ago following mass protests. Last July, renewed protests, in which dozens of people were killed and wounded, led to the military deposing President Mohamed Morsy and the setting up of an interim government. A new constitution was adopted in a referendum last month. 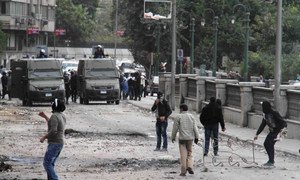