Today, 21 million women, men and children worldwide are trapped in slavery, denied the right to live and ultimately work in freedom, dignity and equality, the United Nations International Labour Organization (ILO) has spotlighted on this International Day for the Abolition of Slavery.

In his message on the Day, marked annually on 2 December, UN Secretary General Ban Ki-moon called on world leaders, businesses and civil society alike to “banish the barbaric practices” of human trafficking, sexual exploitation, the worst forms of child labour, forced marriage and the forced recruitment of children for use in armed conflict.

“Men, separated from their families, are still being locked in clandestine factories, working in situations of bonded labour with negligible wages and remote chances of ever repaying their debts,” the UN chief added.

The International Day for the Abolition of Slavery marks the General Assembly's adoption on 2 December 1949 of the United Nations Convention for the Suppression of the Traffic in Persons and of the Exploitation of the Prostitution of Others.

But he also spotlighted the need for “clear-sighted strategies, strong national legislation and a commitment to coordinate the fight against this crime.”

Donors must support the UN Voluntary Trust Fund on Contemporary Forms of Slavery so civil society can carry out rehabilitation projects, Mr. Ban said, calling on all States to ratify the new Protocol drawn up by the ILO, designed to strengthen efforts to eliminate forced labour.

“We need to improve the lack of access to education and skills for people who live in poverty and suffer discrimination. We must fight the oppression of workers who seek to join trade unions. And we must ensure stronger law enforcement to stop human trafficking once and for all,” he added.

The ILO estimates that forced labour generates illicit profits of $150 billion every year. About two thirds of those profits are made from exploitation – mainly of women and children – in the sex and entertainment industry.

But slavery also brings profits to unscrupulous employers in agriculture, construction, manufacturing, mining, domestic work and other sectors which harbour the majority of those subjected to forced labour.

And it knows no geographical boundaries, touching lives in the North and South alike.

Headway has been made in the form of stronger laws and policies. Workers have joined forces and organized themselves in sectors where forced labour persists. Companies have taken action to eliminate forced labour from their supply chains. And there is a growing movement of citizens who call for an end to the suppression of and discrimination against their fellow-citizens.

ILO's new legally binding standards against forced labour outlined in the Protocol of 2014 to the Forced Labour Convention, 1930 (No. 29) provide guidance to secure the effective eradication of forced labour, trafficking and slavery-like practices, Mr. Ryder said calling on governments to ratify it and step up action at home and abroad.

Several UN human rights experts also weighed in on the Day, calling for action to combat all modern forms of slavery and effectively implement laws and policies.

Some 168 million children are involved in child labour, with more than half of them doing hazardous work, including in slavery-like conditions in artisanal mines and quarries, the experts said citing ILO estimates.

In negotiations towards the adoption of the post-2015 Sustainable Development Goals (SDGs) clear targets must be set to eradicate all forms of slavery and slavery-like practices, including trafficking, child labour and sexual exploitation, the experts emphasized. 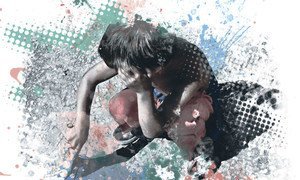 Trafficking in children on the rise, says new UN report

One in three known victims of human trafficking is a child, and girls and women are particularly targeted and forced into “modern slavery,” according to the 2014 Global Report on Trafficking in Persons, released today by the United Nations Office of Drugs and Crime (UNODC) in Vienna.