“2014 is likely to be the hottest year on record and emissions continue to rise. We must act with urgency,” Christiana Figueres, the Executive Secretary of the UN Framework Convention on Climate Change (UNFCCC), warned in her opening address earlier this morning to the 20th session of the Conference of the Parties (COP 20) to the landmark treaty.

“Here in Lima, to aspire to great heights ourselves, we must draw several critical lines of action,” she continued.

According to the conference’s agenda, countries will put forward what they propose to contribute to the planned 2015 agreement in the form of Intended Nationally Determined Contributions (INDCs) by the first quarter of 2015, in advance of the December 2015 conference scheduled in Paris, France, where the new universal UN-backed treaty on climate change will be adopted.

The UNFCCC is an international treaty that considers what can be done to reduce global warming and to cope with whatever temperature increases are inevitable. The COP 20, being held in the Peruvian capital through 12 December, brings together the 196 Parties to the UNFCCC, which is the parent treaty of the 1997 Kyoto Protocol.

Over the course of the next two weeks, delegates will attempt to hammer out the new universal treaty, which would enter force by 2020.

The Lima conference is intended to provide final clarity on what the INDCs need to contain, including for developing countries that are likely to have a range of options from, for example, sector-wide emission curbs to energy intensity goals.

In particular, Ms. Figueres explained, delegates are not only expected to bring a draft of the new universal agreement to the table but also delineate the technical processes behind the steps moving forward and provide clarity on how finance, technology and capacity-building will be handled.

“We must consolidate progress on adaptation to achieve political parity with mitigation, given the equal urgency of both,” she stated. “We must enhance the delivery of finance, in particular to the most vulnerable. Finally, we must stimulate ever-increasing action on the part of all stakeholders to scale up the scope and accelerate the solutions that move us all forward, faster.”

“With success in these areas, COP 20/CMP 10 is poised to deliver pre-2020 action, set the stage for a strong Paris agreement and increase ambition over time, ultimately fulfilling a long-term vision of climate neutrality in the pursuit of development that is truly sustainable for all,” she concluded. 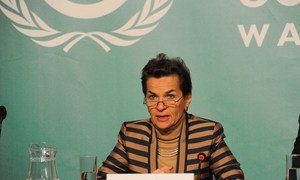 As Governments prepare to meet for the United Nations Climate Change Conference in Lima, Peru, starting on Monday, a top UN official has highlighted the session as an opportunity to raise immediate awareness on climate change and lay the foundation for a new universal agreement to be adopted in 2015.