World Bank/Tom Perry
A Post Office in Nukua'lofa, the capital of Tonga.
1 December 2014

Despite an overall decline in global letter mailings, traditional letter-post still contributes almost half of all postal revenues, the United Nations global post agency has reported, noting that in an ever-evolving communication landscape, postal services still remain a critical lynchpin for international networks.

In a press release citing the latest postal statistics for 2013, the Universal Postal Union (UPU) today said that the downward trend in global letter-post traffic had been offset by a 5.8 per cent uptick in parcel volumes in all regions of the world, except Africa and the Asia-Pacific, where slight decreases were observed. José Ansón, a UPU economist, explained that infrastructure difficulties and competition could be to blame for the lagging figures in both regions.

In addition, the UN agency continued, letter-post accounts for 43.4 per cent of global public postal revenues, which reached $234 billion. In some regions, the contribution to revenues was even higher, reaching 59.6 per cent.

Against the backdrop of a radically changing communication environment, Mr. Ansón noted that the public postal service nonetheless remains widely accessible. There are currently more than five million postal employees around the world in 663,000 post offices and, annually, postal services process and deliver an estimated 368 billion letter-post items and 6.4 billion parcels.

“Despite the transformation the global postal sector is experiencing, it is interesting to note that the global network is not retracting,” he continued. “Rather than seeing a decline of post offices or access points and staff, we are seeing a relative stabilization on both counts. The postal web remains the largest physical distribution network on the planet.”

This year, 2014, is a milestone year as it also marks the 140th anniversary of the UPU, whose establishment helped postal services pave the way to globalized trade and commerce.

With almost 3 per cent of the world’s inhabitants remaining without postal services, including 13 per cent of the African population and eight per cent of citizens in Arab countries, the UN agency has long advocated for increased investment in postal services so that they may reach deprived and rural communities in the hope of stimulating global and local economies and improving livelihoods.

♦ Receive daily updates directly in your inbox - Subscribe here to a topic.
♦ Download the UN News app for your iOS or Android devices.
Communication 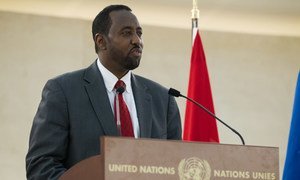 Marking World Post Day, the head of the Universal Postal Union (UPU) said that for postal services to flourish in a globalized and ever-evolving communication landscape, electrical and Internet connectivity is essential, especially in developing countries, where only 32 per cent of the population has access to the Internet.