According to a press release, Ms. Kaag will bring to the role her “wealth of experience” in political, humanitarian and development affairs as well as her deep understanding of the diplomatic world following her service in regions including the Middle East.

Prior to appointment, Ms. Kaag was a Special Adviser to the Secretary-General and previously served as the Special Coordinator of the Organisation for the Prohibition of Chemical Weapons-United Nations Joint Mission to eliminate the chemical weapons programme of the Syrian Arab Republic, from October 2013 to September 2014.

She will succeed Derek Plumbly of the United Kingdom in her new role.

The Secretary-General said he was grateful for Mr. Plumbly’s service to the UN and for his work in Lebanon amid mounting political insecurity.

“Since January 2012, he has led the work of the United Nations in Lebanon with outstanding diplomatic experience and skill during a critical time for the country and the region,” Mr. Ban’s spokesperson said.

There has been a presidential vacuum in Lebanon after the term of Michel Sleiman came to an end on 25 May. UN officials and the Security Council have repeatedly urged the Lebanese Parliament to elect a new leader without delay.

The country has also been dealing with renewed terrorist threats and a growing refugee population resulting from the conflict in neighbouring Syria. 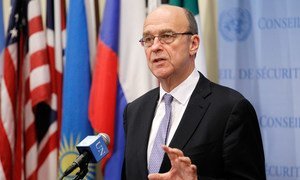 The United Nations envoy for Lebanon said today that the vote in Lebanon’s Parliament yesterday to extend its mandate until 2017 had spared the country a “further serious vacuum,” but, regretfully, elections had been postponed again amid mounting political insecurity.