UNICEF/John James
Workers build an enclosure at the Mayagba Ebola community care centre construction site in Bombali District, which is among the areas worst affected by the disease in Sierra Leone.
26 November 2014

The newest outpost of the United Nations Mission for Ebola Emergency Response (UNMEER) became operational today, while a new head of its Guinea office was named and the World Health Organization reported that the number of cases had stabilized in Guinea, had stabilized or declined in Liberia but may still be on rise in Sierra Leone.

The World Bank Groups Board of Executive Directors, meanwhile, approved a $70 million project for Cte dIvoire to promote the West African countrys pro-active measures to prevent the spread of Ebola.

There is over 800 miles of border between Cte d'Ivoire and both Guinea and Liberia, and the epicentre of the epidemic is in the eastern part of these countries near Cote dIvoires western border, the World Bank reported.

The World Health organization (WHO), in in its lates update issued today, said there have been 15,935 reported cases of Ebola virus disease with 5,689 reported deaths as of November 23, and that case incidence is stable in Guinea, stable or declining in Liberia, but may still be increasing in Sierra Leone.

In other news, UN Secretary-General Ban Ki-moon announced the appointment of Abdou Dieng of Senegal as the Ebola Crisis Manager for Guinea, as part of UNMEER, succeeding Marcel Rudasingwa. In this role Mr. Dieng will continue the Missions work with the Government of Guinea, along with key stakeholders, in ensuring a rapid and effective international response to the Ebola crisis in the country.

Also today, the WHO representative in Mali, Ibrahima Soce Fall, formally started work as the head of the UNMEER office in Mali.

In Liberia, UNMEER welcomed the opening of a 100-bed Ebola treatment facility in Monrovia, which will be staffed by Chinese army medics. The facility will start accepting patients next week.

Meanwhile, UNMEER in Sierra Leone transported blood samples by helicopter for the first time today, and, three flights per week are planned, transporting blood samples from remote locations to laboratories.

In Guinea, the UN Childrens Fund (UNICEF) and its partners in the education cluster have trained thousands of teachers in Guinea on prevention, safe and protected learning, and psycho-social support.

This training aims to sensitize teachers on how to prevent stigmatization of school children orphaned by the epidemic, UNMEER reported. Because of the epidemic, the opening of the school year has been postponed indefinitely.

WHO elaborated today on the uncertainties in date that preclude firm conclusions about progress towards UNMEER goals for December 1, saying over 70 per cent of Ebola patients in Guinea are isolated, while over 80 per cent of required safe and dignified burial teams are in place.

Liberia and Sierra Leone report that fewer than 70 per cent of patients are isolated, though there is wide variation among districts, WHO said. Approximately 25 per cent of the required safe burial teams are in place in both countries.

The targets are part of the so-called 70-70-60 plan which aims to try to get 70 per cent of the cases isolated and treated, and 70 per cent of the deceased safely buried within 60 days from the beginning of October to 1 December.

WHO also warned that the evolving Ebola outbreak highlights the considerable risk of cases being imported into unaffected countries. With adequate levels of preparation, however, such introductions of the disease can be contained before they develop into large outbreaks, the UN health agency said, referring to the success of Nigeria and Senegal in halting Ebola transmission.

Key factors in preventing the spread of [the virus] in both countries included strong political leadership, early detection and response, public awareness campaigns, and strong support from partner organizations, it said.

As of 26 November, WHO teams have visited Benin, Burkina Faso, Cameroon, Gambia, Ghana, Guinea Bissau, Senegal, Mauritania, and Togo. Visits to the Central African Republic, Niger, and Ethiopia are planned for the week beginning 1 December. 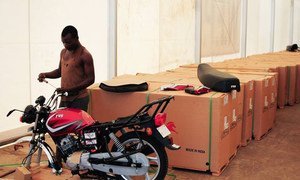 Ebola: December 1 target for response may not be met in some areas of West Africa, UN reports

The United Nations World Health Organization (WHO) said today that while Ebola response targets for December 1 in West Africa may be reached in many places, they may not be met in some areas, and confirmed two new cases in Mali amid ramped up efforts to reduce the likelihood that additional cases will be imported from neighbouring Guinea.