Department of Culture, Kenya
The Isukuti dance of Isukha and Idakho communities of Western Kenya has been inscribed in 2014 on the List of Intangible Cultural Heritage in Need of Urgent Safeguarding.
26 November 2014

Brazil's martial art of Capoeira, Burundi's ritual dance of the royal drum and the preparation of Lavash – a popular flatbread integral to Armenian cuisine – are among the eight elements added today to the United Nations-endorsed list of the world's intangible cultural heritage – part of the world body's ongoing efforts to highlight global diversity and raise awareness of its importance.

The traditions recognized by the UN – which also include the ritual and ceremonies of Sebeïba of Algeria; the traditional art of Azerbaijan's Kelaghavi silk headscarves; the Pujillay and Ayarichi music and dances of Bolivia's Yampara culture; Bosnia and Herzegovina's Zmijanje embroidery and Bulgaria's Chiprovski kilimi carpet-making tradition – were inscribed on the UN Educational, Scientific and Cultural Organization (UNESCO) Representative List of Intangible Cultural Heritage of Humanity, after being chosen by a UNESCO committee that is meeting at the agency's headquarters in Paris this week.

According to UNESCO, the importance of intangible cultural heritage is not the cultural manifestation itself but “rather the wealth of knowledge and skills that is transmitted through it from one generation to the next.”

The agency adds that as older generations pass away and younger generations adapt to a more globalized and modern world, ancient traditions – and the know-how necessary to maintain them – often vanish from the collective memory of a people, their only trace left in anthologies and history books.

In a press release issued on Monday and marking the opening of the 24-member Committee for the Safeguarding of the Intangible Cultural Heritage, Irina Bokova, UNESCO Director-General, commended the body's role in preserving cultural elements at risk and projecting the importance of culture as an instrument for developmental progress.

“Many countries now recognize intangible heritage as a tool that can ensure sustainable development and that they integrate ever more fully its safeguarding in their development and planning programmes,” she said.

The ritual and ceremonies of Sebeïba in the oasis of Djanet, Algeria, for instance, bring together male and female dancers in a nine-day contest aimed at symbolically warding off potential inter-communal violence. Armenia's Lavash similarly functions as a cultural glue, bringing together men and women for the preparation of this bread commonly used in weddings, while Azerbaijan's Kelaghavi headscarf-making tradition helps to 'reinforce the role of women and strengthens the cultural unity of Azerbaijani society.”

For its part, Capoeira – a martial art which unites fight and dance – promotes the mutual respect and social cohesion of its members.

During the course of its week-long gathering, the Committee, chaired by José Manuel Rodríguez Cuadros of Peru, also inscribed three traditions on its list of Intangible Cultural Heritage in Need of Urgent Safeguarding aimed at preserving endangered practices from fading into extinction.

The practices include the Isukuti dance of Isukha and Idakho communities of Western Kenya, the male-child cleansing ceremony of the Lango of central northern Uganda, and the oral tradition of Venezuela's Mapoyo people and its symbolic reference points within their ancestral territory. 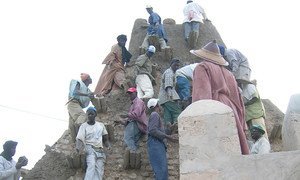 A United Nations committee tasked with protecting the world’s oral traditions, performing arts, social practices, craftsmanship and knowledge of nature will begin examining requests today for inscription on the two lists of intangible cultural heritage, as part of its current session meeting in Paris this week.