MONUSCO/Sylvain Liechti
A member of FIB stands guard in the Beni region of the Democratic Republic of the Congo (DRC) where the UN backed the FARDC in an operation (March 2014).
26 November 2014

The United Nations Security Council has condemned in the strongest terms the massacres perpetrated against civilians on 20 November near the city of Beni in North Kivu in the Democratic Republic of the Congo (DRC) as well as the ongoing attacks targeting peacekeepers.

“These attacks have increased to more than 200 the number of civilians killed since mid-October in this region,” said a statement released by the 15-member Council Tuesday evening.

Members of the Council expressed their deepest condolences to the families of the victims and also condemned attacks against peacekeepers of the UN Organization Stabilization Mission in the Democratic Republic of the Congo (MONUSCO).

They emphasized that any effort to undermine MONUSCO’s ability to implement its mandate “will not be tolerated and that those responsible for threats or attacks against peacekeepers must be held accountable.”

Those responsible for these attacks must be held to account, the Council stressed.

In addition to the Allied Defence Forces (ADF), the Council reiterated their call for the neutralization of the Forces Démocratiques de Libération du Rwanda (FDLR) in line with relevant Security Council resolutions and its presidential statement of 5 November 2014.

Lastly, members reiterated their support for MONUSCO and called on all parties to cooperate with the mission and to remain committed to the full implementation of its mandate. 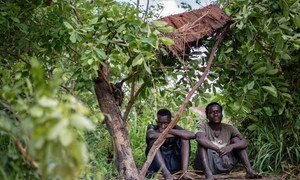 Deeply concerned about the “catastrophic" humanitarian situation in the Democratic Republic of the Congo’s Katanga province, the United Nations refugee agency (UNHCR) today urged Congolese authorities and the UN stabilization mission to boost their respective capacities to stem the violence in the long-troubled, resource-rich area known as “the triangle of death.”