UNHCR/N. Colt
Members of an ethnic Yezidi family sleep in the shade in Shekhadi village, Iraq, after fleeing Sinjar.
25 November 2014

It is the international community’s duty to draw lessons from the horrific violence and atrocious crimes facing minorities around the world to prevent them from being repeated, United Nations Deputy Secretary-General Jan Eliasson said today at a forum on minority issues.

Speaking to the 7th Session of the UN Forum on Minority Issues on “Preventing and Addressing Violence and Atrocity Crimes Targeted against Minorities,” Mr. Eliasson explained that simply saying “never again” is not enough.

“We have all seen the unfolding tragedy in Iraq and Syria where Christians, Turkmens, Yezidis and other minorities have been targeted for the most brutal atrocities,” he said .

“Sadly, this is not an exception. Violence and atrocity crimes directed against minorities all over the world are well documented, including war crimes, crimes against humanity, ethnic cleansing and genocide,” Mr. Eliasson.

The United Nations as a whole and all Member States must renew commitments and intensify efforts to promote and protect minority rights worldwide. To that end, he said that the Forum plays an important part, by helping stakeholders understand the nature of such crimes, root causes and inherent dynamics.

Minority rights are a vital component of all three pillars of the United Nations: peace, development and human rights. They require the systematic and coordinated engagement of every part of the UN system.

This interdependence is at the heart of the Human Rights Up Front initiative, which calls for a system-wide effort to prevent and respond to serious violations of international human rights and humanitarian law, Mr. Eliasson said.

He called on Member States to exercise their moral and political responsibility and take early action when confronted with evidence or known risk factors for atrocity crimes. The Human Rights Council and the High Commissioner for Human Rights also have a crucial role to play.

“This Forum and the mandate of the Special Rapporteur on Minority Issues are clear demonstrations of the serious intent and commitment of the United Nations to protect the rights of minorities,” the Deputy Secretary-General said.

The forum on minority issues was established in 2007 following a Human Rights Council resolution to provide a platform for promoting dialogue and cooperation on issues pertaining to national or ethnic, religious and linguistic minorities.

♦ Receive daily updates directly in your inbox - Subscribe here to a topic.
♦ Download the UN News app for your iOS or Android devices.
minorities 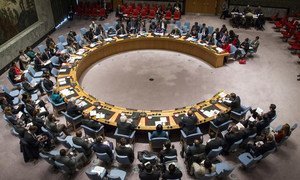 The atrocious crimes perpetrated by the Islamic State of Iraq and the Levant (ISIL) risk plunging Iraq into catastrophe as the country reels from bitter sectarian tensions and a growing humanitarian crisis affecting over 5 million people, top United Nations officials warned today, as they called on the international community to increase efforts in aiding Iraq’s full transition towards a stable democracy.