The United Nations World Health Organization (WHO) has warned of a “rapid” spread of the plague in the capital of Madagascar, where health authorities have reported 119 cases of the bacterial disease, including at least 40 deaths in the island nation.

“Antananarivo, the capital and largest city in Madagascar, has also been affected with 2 recorded cases of plague, including 1 death,” according to a WHO press release . “There is now a risk of a rapid spread of the disease due to the city’s high population density and the weakness of the healthcare system.”

“The situation is further complicated by the high level of resistance to deltamethrin, an insecticide used to control fleas, that has been observed in the country,” WHO reported.

According to WHO, plague is a bacterial disease caused by Yersinia pestis, which primarily affects wild rodents. It is spread from one rodent to another by fleas. Humans bitten by an infected flea usually develop a bubonic form of plague, which produces the characteristic plague bubo, or swelling of the lymph node.

“If the bacteria reach the lungs, the patient develops pneumonia (pneumonic plague),” which is then which is then transmissible from person to person through infected droplets spread by coughing, according to the health agency.

“If diagnosed early, bubonic plague can be successfully treated with antibiotics,” WHO said. “Pneumonic plague, on the other hand, is one of the most deadly infectious diseases; patients can die 24 hours after infection.”

WHO said it was notified by the Ministry of Health of Madagascar of an outbreak of plague - the first case, a male from Soamahatamana village in the district of Tsiroanomandidy, who was identified on 31 August. The patient died on 3 September.

WHO said the national task force has been activated to manage the outbreak.

With support from partners – including WHO, the Pasteur Institute of Madagascar, the “Commune urbaine d’Antananarivo” and the Red Cross – the Government of Madagascar has put in place effective strategies to control the outbreak.

Measures for the control and prevention of plague are being thoroughly implemented in the affected districts. Personal protective equipment, insecticides, spray materials and antibiotics have been made available in those areas.

WHO said it does not recommend any travel or trade restriction based on the current information available. 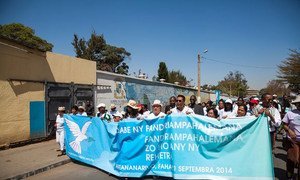