The plight of Palestine refugees from Syria in the Middle East is becoming increasingly grave caused by closed borders and a series of forced returns from neighbouring countries, Chris Gunness, spokesperson for the United Nations Relief and Works Agency (UNRWA) said today.

“We acknowledge the enormous efforts of neighbouring countries to provide refuge to Palestine refugees and the security challenges they face, but we are receiving increasing reports of Palestine refugees from Syria finding it difficult to seek refuge in countries in the region including Jordan, Lebanon, Turkey and Egypt as well as in Europe,” Mr. Gunness said.

This forces the already vulnerable Palestinian population to take life threatening risks, such as attempting to escape by boat on the Mediterranean, often with tragic consequences, Mr. Gunness explained.

Lebanon has provided refuge to 44,000 Palestine refugees from Syria since the conflict began. However, on 4 May, the Lebanese authorities returned 41 Palestine Refugees from Syria to Syria who were arrested at the airport for holding forged visas to third countries.

“At the same time, border restrictions were tightened, effectively denying Palestine Refugees from Syria entry to Lebanon, including humanitarian cases and those seeking reunification with their families,” said Mr. Gunness.

In September, Lebanese authorities afforded Palestine Refugees from Syria the opportunity to extend expired visas free of charge for 3 months, while Syrians were given six months.

But it is unclear what happens after their visas expire. Many Palestine refugees continue to have irregular status in Lebanon which makes it difficult to access social services and receive civil documentation.

“In 2014, UNRWA has been made aware of 106 cases of involuntary deportations of Palestine refugees from Jordan to Syria, many of which have been children and women,” Mr. Gunness explained.

“This is likely a conservative estimate of the number forced back,” he added.

With the border effectively closed, it is also not possible to know how many Palestinian refugees in Syria have been prevented from fleeing the country to Jordan. Palestine refugees are exposed to the risk of refoulement (or “forced return”) and endure a considerable degree of insecurity.

Meanwhile, in Egypt, where an estimated 4,000 Palestinian refugees currently reside, entry for Palestine refugees from Syria requires a visa, but these are no longer issued for them. In that country, Palestine refugees from Syria receive some support from the United Nations but their children do not attend school, visas are no longer renewed, and they all are highly vulnerable.

Mr. Gunness also said that Palestinian refugees are also seeking to flee Syria via Turkey but UNRWA does not have a mandate to operate in Turkey, leaving that for UN refugee agency (UNHCR) to look into.

The International Day of Solidarity with the Palestinian People, marked annually on 29 November, and falling this week on a Saturday, will be celebrated at the United Nations with special events held throughout the week. 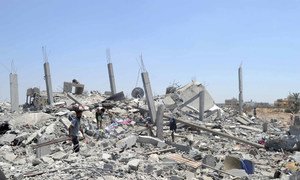 Political action on the part of the international community is urgently required to tackle the fundamental issues that would determine the fate and plight of more than 5.1 million Palestinian refugees, the head of the United Nations relief agency tasked with their assistance said today.