IRIN/Kristy Siegfried
Athens residents protest the Greek government’s handling of the financial crisis during a national strike in September 2012.
24 November 2014

Faced with an “anaemic” pace of job creation and nearly 1.3 million unemployed citizens, Greece risks a prolonged social crisis unless urgent measures are taken, warns a new report out today from the International Labour Organization (ILO).

According to the report, Productive Jobs for Greece, more than 70 per cent of the almost 1.3 million unemployed people in the country have been out of a job for more than a year, as a result of one in four jobs being lost since the beginning of the country’s economic crisis in 2008.

Meanwhile, the number of Greeks at risk of poverty more than doubled in five years, rising from just above 20 per cent in 2008 to upwards of 44 per cent in 2013, the report found.

“Greece is at a critical juncture and to set the country on a sustainable recovery path, urgent measures to support people and firms are needed,” ILO Director-General Guy Ryder said in a

“Such measures should be defined in a tripartite setting bringing together Government, employers and workers,” he added.

The ILO notes that Greece’s recovery strategy has been largely built on the premise that lower wages and fiscal consolidation would on their own restore competitiveness and boost economic growth. However, the report shows that a range of other issues – not wages – are at the origin of the competitiveness problem.

“The strategy so far, while it has helped restore public finances, has not achieved the expected results in terms of a sustainable economic and employment recovery,” said Raymond Torres, Director of the ILO’s Research Department.

In addition to the recent steps by the Government to address the most acute social problems, the ILO report calls for a more comprehensive employment strategy that includes a range of measures to support job creation, tackle the crisis’ most pressing impacts, and put the economy on a sustainable track.

The strategy covers both emergency measures and more sustained action. The proposed emergency measures include an activation guarantee to all young jobseekers and groups most in need; the nurturing of “social economy” enterprises as avenues for job creation; improved access to credit for small businesses; and a review of the pace and policy mix of fiscal consolidation so as not to undermine recovery efforts.

In the longer term, the study advocates broadening the economic base by facilitating the expansion of sustainable enterprises, boosting the linkages between tourism and agro-food, and fostering employment-enhancing investments.

Other proposed measures include tackling undeclared work and working poverty through a broader tax base and improved incentives for low-paid work, while shifting the tax burden away from labour, small firms and consumption of basic needs towards other bases like property; enhancing human capital by designing skill programmes in partnership with firms, workers and education providers; leveraging further apprenticeships and work-related experience for youth; and reinforcing public employment services and active labour market programmes.

“The proposed shift to a new growth and employment strategy is based on an analysis of best international practices adapted to the specific situation of Greece,” Mr. Ryder said.

“A more comprehensive approach is possible. To make it a reality, the ILO stands ready to cooperate with the Greek government and social partners, and with the European Commission, as key actors of an urgent job-rich recovery,” he added. 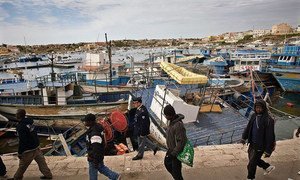 Against a backdrop of aging populations and persistently low economic growth, few European governments are doing enough to help recent immigrants move from low-skilled precarious jobs and into decent work, says a new report out today from the International Labour Organization (ILO) and the Migration Policy Institute.