United Nations Secretary-General Ban Ki-moon has condemned the brutal killing of 28 people on a bus in Mandera, Kenya in the latest spate of terrorist violence to afflict the East African nation.

In a statement issued today by his spokesperson, Mr. Ban conveyed his “profound condolences” to the families of the victims while pledging the UN's “continuing support” to Kenya and the countries of the region “in their multidimensional efforts to address the scourge of terrorism.”

According to media reports, militants claiming to belong to the Al-Shabaab extremist group hijacked the commuter bus travelling to Nairobi, the country's capital, in the early morning hours of 22 November, executing at least 28 of the passengers.

Al-Shabaab's operations have sown terror across Somalia and Kenya in recent years with coordinated attacks against hotels, shopping centres, and other civilians areas.

Mr. Ban expressed his solidarity with the people and the Government of Kenya and voiced the hope that those responsible for today's attack would be brought to justice “swiftly.”

At the same time, the Special Representative of the UN Secretary-General (SRSG) for Somalia, Nicholas Kay, echoed Mr. Ban's outrage with his condemnation of the “horrendous terrorist attack,” adding that the killing showed “complete disregard for humanity.”

In a separate statement issued by his spokesperson, Mr. Kay reiterated the UN's “unfaltering commitment to fighting the scourge of terrorism” and his office's continuing support for Somalia and the region “to ensure security and stability.” 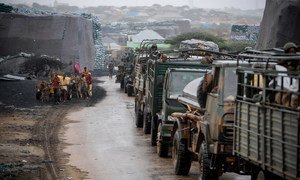 Secretary-General Ban Ki-moon today condemned “in the strongest terms” the attacks that took place on Sunday in Mpeketoni, Kenya, which reportedly killed at least 48 people and wounded many more.