On a tour of the United Nations Accessibility Centre for the audio, visual, and physically impaired today, United States Senator Tom Harkin said that “when you make a system better for a person with a disability it makes it better for people without disabilities.”

In an interview with UN Radio, Mr. Harkin, who is the lead advocate for disability rights in the US Congress, explained why he was so passionate about the UN Convention on the Rights of Persons with Disabilities (CRPD).

“Well, it means that we now have a global effort to make things more accessible for everyone for all persons with disabilities in education, in transportation, communication, everything,” Mr. Harkins said.

“The CRPD means raising standards all globally for persons with disabilities and, if I might add, what we have found at least in the united states and I'm sure in other countries too, that when you make a system better for a person with a disability its makes it better for people without disabilities,” the Senator added.

The Senator's visit to the Accessibility Centre in New York comes after the recent Senate's rejection of the Convention (CRPD).

Senator Harkin pledged that he will work tirelessly to ensure Senate ratification of the CRPD.

The Convention and its Optional Protocol, adopted by the UN General Assembly on 13 December 2006, aims to change attitudes and approaches to persons with disabilities.

The United Nations Accessibility Centre, which opened in December 2013, is equipped with state-of-the-art assistive information and communication technology to support audio, visual as well as physical impairments.

At the time, Secretary-General hailed the new facility as “a model of the digital United Nations we are trying to create.”

Equipment from the Centre is spread out all over Headquarters. Palm On keyboards can be found at other IT kiosks around the building. Other available services include: braille and other assistive keyboards, hearing aids, bone conduction headsets and screen readers. 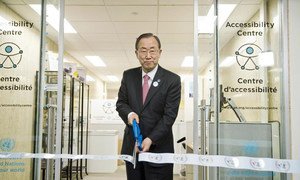 Hailing a new facility that enables greater participation of persons with disabilities in intergovernmental processes at Headquarters as “a model of the digital United Nations we are are trying to create,” Secretary-General Ban Ki-moon said today the initiative showed the Organization is making strides towards creating a disability-inclusive world.