Every year, household air pollution from cooking kills over four million people and sickens millions more, the United Nations spotlighted at a New York conference on cookstoves, as it urged Governments to take action to accelerate the adoption of clean cooking solutions.

The first-ever Cookstoves Future Summit, “Fueling Markets, Catalyzing Action, Changing Lives,” is intending through the financial and political commitments of Member States to improve the health of women living in poverty, who are disproportionately burdened with poor health and unpaid care work in the absence of goods and services such as clean cookstoves.

As it stands now, nearly three billion people worldwide continue to rely on solid fuels to cook, causing serious environmental and health impacts, ">according to the World Health Organization (WHO).

An estimated 4.3 million people die each year from indoor pollution. They die from strokes, and heart and pulmonary diseases, such as childhood pneumonia and lung cancer. These diseases are primarily caused by high levels of fine particulate matter and carbon monoxide released by the burning of solid fuels such as wood, coal, crop waste and charcoal in inefficient stoves.

Making the announcement at today’s event, the UN World Food Programme (WFP) pledged to help 10 million people safely prepare and consume the food it provides by 2020.

The new commitment announced by WFP today – one of the most significant in the humanitarian field – would mean increasing WFP’s current target of 6 million people by the end of 2015, to 10 million by 2020. This would require $20 million over a period of four years. Implementation of activities will depend on available funding.

Through the SAFE initiative (Safe Access to Fuel and Energy) WFP is supporting women with fuel-efficient stoves and livelihood opportunities. Many women spend hours travelling long distances to collect firewood, putting themselves at risk of attack and sexual violence. Fuel-efficient stoves ensure they have the means to properly cook food without jeopardizing the environment or their personal safety.

According to UN Women’s "http://www.unwomen.org/en/digital-library/publications/2014/10/world-sur...">2014 World Survey on the Role of Women in Development, women take on the majority of care work and cooking in their households, putting women and their children at greater risk of exposure to harmful smoke emitted from biomass-burning cookstoves.

The Cookstoves Future Summit, hosted by the Global Alliance on Clean Cookstoves, brought together more than 65 Ministers, CEOs and Executive Directors to discuss ways to reduce deaths, illness and environmental degradation through the implementation of clean cooking solutions. Participants made financial and policy pledges at the event. 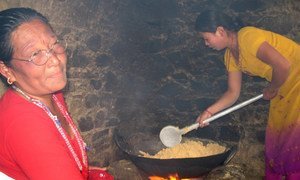