In a move hailed as renewed global momentum to end hunger, leaders from over 170 countries attending a United Nations nutrition conference which concluded today, pledged to establish national policies aimed at eradicating malnutrition – in all its forms from, hunger to obesity – and transform food systems to make nutritious diets available to all.

The Second International Conference on Nutrition (ICN2) organized by the UN Food and Agriculture Organization (FAO) and held at its Headquarters in Rome, Italy brought together over 2200 participants, including 100 ministers and vice ministers, 150 representatives from civil society and nearly 100 from the business community.

The three day summit opened with Governments adopting the Rome Declaration on Nutrition, along with a Framework for Action that gives recommendations for national policy-makers to combat malnutrition and put healthy diets and environmental sustainability at the centre of food, from farm to fork.

“Malnutrition is the number one cause of disease in the world. If hunger were a contagious disease, we would have already cured it,” said FAO Director-General José Graziano da Silva in his closing remarks.

“This Conference on nutrition is the beginning of our renewed effort,” he said. “It will be acknowledged for having brought nutrition into the public sphere, making it a public, not a private, good,” Mr. Graziano da Silva explained.

In an interview with UN Radio, FAO Deputy Director-General Marie Helena Semedo said that moving forward, the agency expected the aims of the Declaration and Framework for Action to be implemented in country action plans.

“The [delegations] were really committed, with very strong political will to create integrated nation plans to tackle all forms of malnutrition, including obesity and overweight,” she said, expressing the hope that countries themselves and the international community would implement the ICN2 outcomes and support the resource mechanism set up by FAO.

To ensure accountability post-ICN2, the fund will also help countries build robust mechanism to monitor progress on their nutrition commitments.

Oleg Chestnov, from the UN World Health Organization (WHO) the other co-organizer of the event, called today’s political commitments – the first to include solutions that will address malnutrition in all its forms, from hunger to obesity – landmark.

“We look forward to working with Member States and FAO to move ahead without delay, through policies and actions that will change the lives of millions,” Mr. Chestnov said.

Throughout the conference both the FAO and WHO stressed the importance of collaborating across sectors to respond to modern nutrition challenges, but also made it clear that the fight against malnutrition ought to be led by national governments through concrete commitments.

In the same vein, civil society and the private sector are essential allies in combatting malnutrition as they can hold governments accountable and deliver food to consumers. 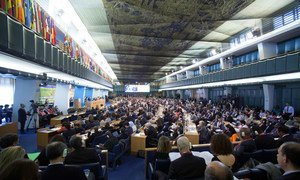 The international community must intensify its efforts towards eradicating hunger and malnutrition, top United Nations officials declared today at the opening of a major global food conference held in Rome, Italy, as 170 Member States adopted a series of pledges aimed at ensuring that that all citizens around the world gain better access to healthier and more sustainable diets.