Ebola: Ban hopeful of outbreak’s end by mid-2015; UN to set up response office in Mali

UN Photo/Eskinder Debebe
Secretary-General Ban Ki-moon (at podium) holds a press conference on the UN System’s response to the Ebola crisis. He is joined by the UN Chief Executives Board (CEB) members.
21 November 2014

Secretary-General Ban Ki-moon today said that by continuing to scale up the global fight against Ebola, there is hope the outbreak could be contained by mid-2015, but he emphasized that results to date are still uneven, and announced that the Organization’s top health officials will head to Mali, where the situation is still a cause of "deep concern.”

At a press conference at World Bank headquarters in Washington, D.C. after what he said were “in-depth” discussions with the UN System Chief Executives Board for Coordination (CEB) on the joint UN response to counter the Ebola outbreak in West Africa, the Secretary-General said he had also asked the UN Mission for Ebola Emergency Response (UNMEER) to set up an office in Mali, where “the new chain of transmission…is a cause of deep concern.”

Saying that “the rate of transmission continues to increase in too many places,” Mr. Ban made an urgent appeal for ramped up resources. Earlier today, the UN World Health Organization (WHO) said there have been 6 reported cases in Mali, all of whom have died, as of 20 November. A total of 327 contacts are being followed-up, it said.

But Mr. Ban noted “some welcome progress,” saying: “We are seeing the curve bending in enough places to give us hope.”

He also said “if we continue to accelerate our response, we can contain and end the outbreak by the middle of next year.”

"I appeal to the international community to stay engaged," he said. "The United Nations system will continue to scale up our response until the very last case of Ebola is identified and treated.”

Mr. Ban said he had spoken to President Ibrahim Boubacar Keita of Mali and informed him that, as a way to show solidarity and unity and immediate support, WHO Executive Director Dr. Margaret Chan, and Dr. Michel Sidibé, Executive Director of the Joint UN Programme on HIV/AIDS (UNAIDS), are travelling to Mali immediately to have in-depth discussions on how the UN system can eradicate the virus and prevent further outbreaks there.

Dr. Chan told reporters: “We must smother this fire…before it gets out of control.

“I am confident that if we work together as one, we would be able to bring this outbreak under control,” she added.

The CEB is made up of 29 Executive Heads of UN Funds and Programmes, specialized agencies, including the Bretton Woods Institutions, and related organizations – the World Tourism Organization and the International Atomic Energy Agency.

Dr. Nabarro said the UN system will need $1.5 billion dollars through to March 2015 to assist with ending the outbreak.

“Much has been committed, but there is a shortfall of over $600 million,” he said.

He said “the primary credit for progress in the fight against Ebola goes to the communities that have made difficult decisions to abandon generations of traditional practices,” but warned that “if we take our eye off the ball, case numbers will climb again.”

“We must remain vigilant and persevere with a flexible and well-adapted response,” Dr. Nabarro said.

Foreign Minister Julie Bishop of Australia, which holds the Council’s presidency for the month, read out a wide-ranging statement approved by the 15-member body that included a request to the Secretary-General to accelerate efforts to scale-up UNMEER’s presence and activities at the district and prefecture level outside of the capital cities.

In this regard, UNMEER subsequently announced it will immediately open an office in Mali to support national efforts against the Ebola virus.

“UNMEER is committed to supporting the Government of Mali's Ebola response efforts,” said Mr. Banbury, who visited the country earlier this week. “[Mali] has a small number of cases now and this means there is a chance to end it quickly before it becomes a true crisis the way it has become in other countries.”

According to UNMEER’s press release, the Mission’s office will be tailored to support Mali’s response efforts, with three expected areas of focus: reinforcing the country’s operational response, strengthening the country's level of preparedness and assisting with cross-border coordination of Ebola efforts between Malian and Guinean authorities.

UNMEER will review the needs of its Mali office’s operations in two months.

Earlier today, WHO released its latest report on Ebola cases dated November 18, which put the number of cases at 15,351 cases in Guinea, Liberia, Mali, Sierra Leone, Spain, and the United States and in the previously affected countries of Nigeria and Senegal, with 5,459 reported deaths.

A separate, unrelated Ebola outbreak in the Democratic Republic of the Congo has now been declared over, WHO reported, commending the country’s strong leadership and effective coordination of the response to the seventh outbreak of Ebola in the DRC since the virus was first identified there in 1976. 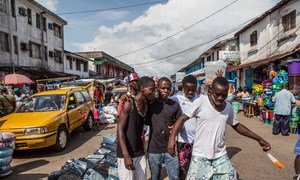 On the eve of a meeting of United Nations agency chiefs to discuss ways to jointly tackle the Ebola outbreak, the World Bank reported today Liberia’s labour sector has suffered a huge blow since the start of the crisis, as a “massive effort” was underway in Mali to halt the spread of the re-emerged virus.