The next phase in reconstruction efforts for war-ravaged Gaza is slated to begin as early as next week following an updated “understanding” between Israeli and Palestinian stakeholders, the United Nations special envoy in the region has announced.

In a statement released today, the UN Special Coordinator for the Middle East Peace Process, Robert Serry, hailed what called a “further understanding” to the trilateral agreement between Israel, the Palestinian Government of National Consensus, and the UN, permitting some 25,000 home owners in Gaza to access building materials for the repair of their homes damaged in the recent 51-day conflict there.

“They will be able to procure the materials to repair or rebuild their properties in the same locations where they were located prior to the conflict,” Mr. Serry explained in his statement, adding that special precautions are also being implemented to avoid any misuse of the UN-backed reconstruction mechanism or diversion of materials for belligerent purposes.

“Materials procured under the mechanism may only be used for their intended purpose,” he continued. “The United Nations will undertake spot checks to monitor compliance.”

Mr. Serry emphasized the UN’s commitment to assisting the Palestinian Government of National Consensus in its reconstruction efforts through direct financial support to homeowners in need. But, he added, existing resources were largely insufficient, particularly as pledges made at last month’s Cairo International Conference and amounting to about $2.1 billion were slow to arrive.

“The Special Coordinator calls on all parties concerned to lend their full support to enable the mechanism to operate at the required scale in the interests of the affected population in Gaza,” the statement said. 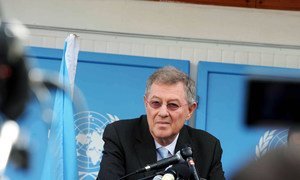 The United Nations-backed mechanism designed to provide war-ravaged Gaza with reconstruction materials for urgent shelter repairs has commenced its operations, a senior UN official in the region has announced.