Opening a high-level meeting this morning at UN Headquarters in New York, the President of the General Assembly, Sam Kutesa, underscored that the Convention is a collective commitment to ensure that every child worldwide has the right to a fair start in life, calling on Member States to safeguard that such rights are fully reflected in the post-2015 development agenda.

“We must continue investing in the rights of all children across the world – no matter their gender, ethnicity, race, disability or economic status,” Mr. Kutesa said.

“Children are the fundamental building block for achieving the future we want. Indeed, by strengthening their capacity to mature into engaged, responsible and productive adults, society as a whole stands to benefit,” he added.

With the 2015 deadline to achieve the UN Millennium Development Goals (MDGs) quickly approaching, Mr. Kutesa stressed that it is equally important to ensure mobilization of the resources that will be required to implement a “truly transformative” development agenda that puts the welfare of all people, especially children, at the forefront.

Speaking on behalf of Secretary-General Ban Ki-moon, the Executive Director of the UN Children’s Fund (UNICEF), Anthony Lake, highlighted that while millions more children are surviving past their fifth birthday, life is not better for some 17,000 children under five who will die today, mostly due to preventable causes.

“The health and the soul and the intelligence of a society are measured by how the human rights of its youngest – its smallest children – are recognized everywhere,” Mr. Lake stressed.

Moreover, he noted that, too often, progress regarding the well-being of children has been measured through national statistical averages, but averages don’t capture every life or see the children being left behind in today’s turbulent times.

This includes children who are forced to flee from their homes to refugee camps, children caught in the crossfire of brutal and protracted conflicts, children who see their schools used for military purposes, and children who see people around them falling to the scourge of Ebola, among other problems.

While the humanitarian community may be losing ground to these escalated emergencies, however, it is not “losing heart,” Mr. Lake noted. The ground that is gained, he said, should still be recognized and even celebrated, as those small and individual wins are ultimately the primary concern.

“It is our job, our responsibility, our obligation under the Convention to show every child the best of humanity: cooperation, not conflict; humanity, not hatred; reconciliation, not revenge,” Mr. Lake said.

“That, in the end, is the central message and meaning of the Convention: the importance of preparing today’s children to become tomorrow’s adults, tomorrow’s leaders.”

Speaking next, Ivan Šimonović, UN Assistant Secretary-General for Human Rights, said that while children have access to a better standard of life today, great inequalities still persist around the world.

“This is a time to recommit to the vision of the Convention and to its full implementation,” he said. “It is also a time to bring children and their rights more centrally into our peace, security and development goals. Our future in these areas depends on our children and on our respect for their rights,” he added.

The Convention on the Rights of the Child was adopted by the General Assembly on 20 November 1989 and to date has been ratified by 194 countries, making it the most widely ratified international human rights treaty. Its adoption marked the first time that children were explicitly recognized as having specific rights.

Also as part of celebrations marking the anniversary of the Convention’s adoption, UNICEF unveiled at UN Headquarters earlier today the #IMAGINE project, a musical and technological initiative to highlight the challenges children face the world over.

The project brings together artist Yoko Ono, music producer and DJ David Guetta, UNICEF Ambassadors – including Katy Perry, Angélique Kidjo, Daniela Mercury, Priyanka Chopra and Yuna Kim – as well as other supporters in a new interactive digital experience. The launch of the project was made in conjunction with the agency’s release of its latest State of the World’s Children report.

Earlier this morning, a high-level panel discussion on the Convention was held at the UN in New York, organized by the Office of the Special Representative of the Secretary-General on Violence against Children.

Later this afternoon, an interactive panel discussion on the theme of “25 Years of the Convention on the rights of the Child: is the world a better place for children?” will be held, also at UN Headquarters. The discussion will be chaired by Queen Silvia of Sweden and Laura Vargas Carrillo of Mexico. Several missions are also holding side events related to the Convention’s anniversary today. 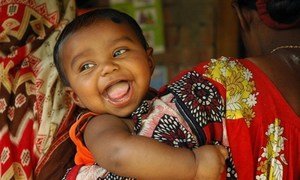 As the global human rights community readies to celebrate tomorrow the 25th anniversary of the adoption of the Convention on the Rights of the Child, the United Nations committee charged monitoring with its implementation highlighted the right of children to actively participate – and not just be heard – in discussions that affect their lives and communities.