Echoing calls from the wider United Nations community, the Security Council today expressed concern at allegations over the mass rape in late October of 200 women and girls in Tabit, North Darfur, calling on the Government of Sudan to conduct a thorough investigation.

In a press statement, the Council called on the Sudanese Government to fulfil its obligation to allow, in accordance with its agreement with the UN and the African Union (AU) concerning the status of the AU-UN Hybrid Operation in Darfur (UNAMID) and relevant Council resolutions, the “full and unrestricted freedom of movement without delay throughout Darfur to UNAMID, so as to enable them to conduct a full and transparent investigation, without interference, and verify whether these incidents have occurred.”

Further to the statement, the Council called on Khartoum to ensure accountability, if the allegations are verified.

The Council noted that proper access to Tabit and its population for UNAMID is “essential to conducting a full investigation into the allegations in order to determine their veracity and, if verified, to ensure accountability.”

On Monday, Secretary-General Ban Ki-moon said he was “deeply troubled” by the persistent allegations, and urged Government officials to grant unfettered access to the town so that investigators can verify the reports.

UN spokesperson Farhan Haq subsequently announced that UNAMID had again asked for access to Tabit and will deploy a team immediately, once such access has been granted.

UNAMID first visited Tabit, which is located 45 kilometres south-west of El Fasher, in North Darfur, on 9 November, after declaring that it would conduct an investigation into the veracity of the claims. However, the heavy presence of military and police in Tabit made a conclusive investigation difficult.

On 7 November, the UN Special Representative of the Secretary-General on Sexual Violence in Conflict, Zainab Hawa Bangura, also expressed concern about the allegations and called on the Government of Sudan to allow immediate and unhindered access for an investigation.

Tensions have been simmering across Darfur throughout the past few months. In October, an attack on UNAMID peacekeepers by armed militants claimed the lives of three peacekeepers. 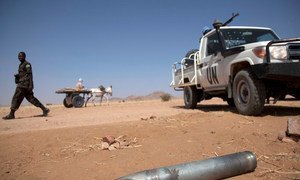 United Nations Secretary-General Ban Ki-moon said today that he is deeply troubled about persistent allegations of mass rape in Tabit, North Darfur, and urged Government officials to grant unfettered access to the town so that investigators can verify these reports.