More than 700 representatives from governments, inter-governmental organizations, UN bodies and civil society in Asia and the Pacific began meeting today to advance gender equality and women’s empowerment with the keynote speaker highlighting the urgency of eliminating violence against women and girls.

The “Asian and Pacific Conference on Gender Equality and Women’s Empowerment: Beijing+20 Review” is being convened in Bangkok, Thailand by the UN Economic and Social Commission for Asia and the Pacific (ESCAP), in cooperation with UN Women, from 17 to 20 November.

In her keynote address at the opening of the conference, Her Majesty Ashi Sangay Choden Wangchuk, the Queen Mother of Bhutan, highlighted the urgency of eliminating violence against women and girls.

The “eradication of violence from the lives of women and girls, along with peace, democracy and sustainable development in the region, will become possible when women and girls are valued, when their ability to fully and freely exercise their human rights is wholly supported, when there is equality in the exercise of power and when decisions are made to fully resource comprehensive and evidenced-based interventions,” she said.

ESCAP Executive Secretary, Dr. Shamshad Akhtar, in her opening address to more than 700 participants including ministers and representatives of civil society said the Conference “provides a unique opportunity to recommit Asia and the Pacific to the goal of gender equality and the means of accelerating the realization of human rights and opportunities for all women and men, girls and boys.”

Over the next two days, delegates to the Conference will discuss and identify strategies for accelerating implementation of the Beijing Platform for Action, adopted by the 1995 Fourth World Conference on Women, as a key means of achieving gender equality, including such measures as strengthening Government institutions and accountability, forging stronger partnerships and enhancing financing.

The Asia-Pacific Conference concludes on 20 November with the anticipated adoption of the “Asian and Pacific Ministerial Declaration on Advancing Gender Equality and Women’s Empowerment,” which will serve as the regional voice in next year’s global discussions and agenda setting.

In her video message to the Conference, the Executive Director of UN Women, Phumzile Mlambo-Ngcuka, said: “Member States are moving into the final stage of crafting the post-2015 development framework, it is vital that in your regional and global development cooperation you remain vigilant in this process to maintain a strong gender goal as well as the targets and indicators on gender equality across other goals.” 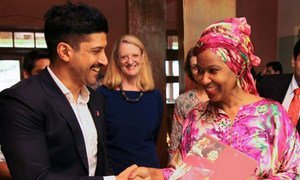 The United Nations body focused on gender equality and women’s empowerment today announced that it has appointed its first male Goodwill Ambassador ever – Bollywood superstar, Farhan Akhtar – who will focus his efforts on South Asia.