For every dollar invested in water and sanitation, there is a $4.3 return in the form of reduced health care costs for individuals and society around the world, where 2.5 billion people still lack access to basic sanitation services, with 1 billion practicing open defection, the United Nations World Health Organization (WHO) said today.

WHO released a major new report behalf of UN-Water that showed that while global efforts to provide improved water and sanitation are gaining momentum, “serious gaps” in funding continue to hamper progress.

The UN health agency also noted that “At the time of writing, poor WASH [water and sanitation] conditions in communities and institutional settings, especially health facilities, have been exacerbating the spread of Ebola in West Africa.”

According to WHO estimates, the UN-Water Global Analysis and Assessment of Sanitation and Drinking-Water published bi-annually, presents data from 94 countries and 23 external support agencies. This year’s report was also released in connection with events to mark World Toilet Day.

“Now is the time to act,” Michel Jarraud, Chair of UN-Water and Secretary-General of the World Meteorological Organization (WMO), said in a press release.

“We may not know yet what the post-2015 sustainable development agenda will look like. But we do know that water and sanitation must be clear priorities if we are to create a future that allows everyone to live healthy, prosperous and dignified lives.”

International aid for water and sanitation is on the rise: according to the report, financial commitments increased by 30 per cent between 2010 and 2012 – from $8.3 billion to $10.9 billion. And aid commitments are increasingly targeted to underserved regions, notably sub-Saharan Africa, Southern Asia and South-eastern Asia.

“Despite these gains, 2.5 billion men, women and children around the world lack access to basic sanitation services,” WHO said. “About 1 billion people continue to practice open defecation. An additional 748 million people do not have ready access to an improved source of drinking-water.”

“And hundreds of millions of people live without clean water and soap to wash their hands, facilitating the spread of diarrhoeal disease, the second leading cause of death among children under five,” the report said.

The report also said that “many other water-borne diseases, such as cholera, typhoid and hepatitis, are prone to explosive outbreaks. Poor sanitation and hygiene can also lead to debilitating diseases affecting scores of people in the developing world, like intestinal worms, blinding trachoma and schistosomiasis.”

The report also said that investments in water and sanitation yield substantial benefits for human health and development.

“Economic benefits include an overall estimated gain of 1.5 per cent of global GDP and a $4.3 return for every dollar invested in water and sanitation services due to reduced health care costs for individuals and society,” the report said. “Millions of children can be saved from premature death and illness related to malnutrition and water-borne diseases. Adults can live longer and healthier lives.”

“Gains in quality of life include improved school attendance, greater privacy and safety – especially for women, children and the elderly – and a greater sense of dignity for all,” WHO said.

UN-Water is the United Nations (UN) coordination mechanism for freshwater related issues, including sanitation. UN-Water is comprised of UN entities with a focus on, or interest in, water related issues and its main purpose is to complement and add value to existing programmes and projects by facilitating synergies and joint efforts, so as to maximize system-wide coordinated action and coherence.

The work of UN-Water is organized around thematic priority areas and task forces as well as awareness-raising campaigns such as World Water Day (22 March) and World Toilet Day (19 November). 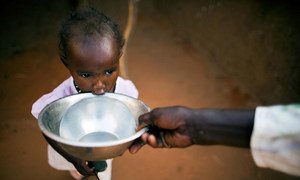 The most basic of all human rights – water – is also a central element in global affairs and the development agenda with wide implications on international peace and security, the Deputy Secretary-General told participants today the World Water Summit held in London.