“We have bent the trajectory of the epidemic,” said Michel Sidibé, Executive Director of UNAIDS in a press release. “Now we have five years to break it for good or risk the epidemic rebounding out of control.”

The fast-track approach emphasizes the need to focus on the counties, cities and communities most affected by HIV, and recommends that resources be concentrated on the areas with the greatest impact.

In particular, the approach highlights that efforts are needed in the 30 countries that together account for 89 per cent of new HIV infections worldwide. To fast-track national responses in these 30 priority countries will require extensive mobilization of human, institutional and strategic international partners, as well as significant commitments from both national and international sources, UNAIDS said.

Other targets include reducing the annual number of new HIV infections by more than 75 per cent, to 500,000 in 2020, and achieving zero discrimination.

Adhering to the targets would mean that nearly 28 million new HIV infections would be averted by 2030, UNAIDS said. 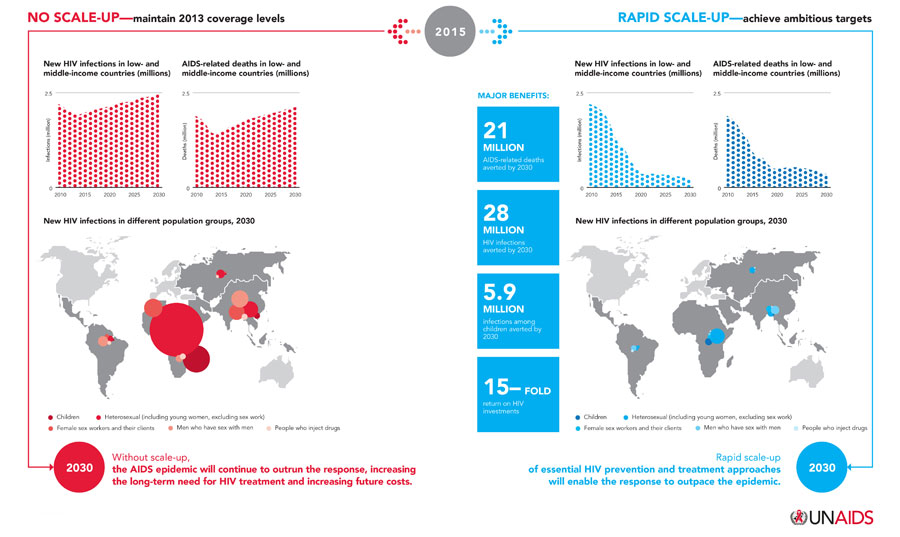 By June 2014, some 13.6 million people had access to antiretroviral therapy, which UNAIDS says is a huge step towards ensuring that 15 million people have access by 2015, but still a long way from the fast-track targets. Efforts are particularly needed to close the treatment gap for children.

Furthermore, international funding support will be needed to supplement domestic investments, particularly in low-income countries, which are currently only funding about 10 per cent of their responses to HIV through domestic sources, UNAIDS said.

“If we invest just $3 dollars a day for each person living with HIV for the next five years we would break the epidemic for good,” Mr. Sidibé stressed.

“And we know that each dollar invested will produce a $15 return,” he added.

If sufficient investments are achieved, global resource needs will start to reduce from 2020. By 2030, the annual resources required in all low- and middle-income countries will decline to $32.8 billion, down 8 per cent from the $35.6 billion needed in 2020. These resources will provide antiretroviral treatment to twice as many people in 2020 than in 2015, according to the report.

The report was launched earlier today at the University of California, Los Angeles (UCLA). Mr. Sidibé was joined by actress Charlize Theron, UN Messenger of Peace and Founder of the Charlize Theron Africa Outreach Project.

At conference, UNAIDS chief calls for end to 'hypocrisy' in fighting HIV/AIDS

The head of the United Nations agency dealing with HIV and AIDS today urged world leaders at an international conference in Australia to end the hypocrisy on sex and make treatment and reproductive health education universally available.