UNHCR/B. Sokol
Two men displaced by violence in northern Katanga, Democratic Republic of the Congo (DRC), sit beneath the makeshift shelter which is now their home.
18 November 2014

Deeply concerned about the “catastrophic" humanitarian situation in the Democratic Republic of the Congo’s Katanga province, the United Nations refugee agency (UNHCR) today urged Congolese authorities and the UN stabilization mission to boost their respective capacities to stem the violence in the long-troubled, resource-rich area known as “the triangle of death.”

According to UNHCR, violence in the south-eastern Democratic Republic of the Congo (DRC) province has forced some 400,000 people to flee their homes since the end of 2012, bringing the total number of internally displaced people (IDPs) in the province to nearly 600,000. During the last three months alone, more than 71,000 people have been newly displaced.

In October, UNHCR registered 1,737 incidents in the territories of Kalemie and the so-called “triangle of death” between the towns of Manono, Mitwaba and Pweto in northern Katanga. These included the looting and burning of houses, extortion, torture, forced labour and recruitment into armed groups, as well as sexual violence.

“We fear that this number of incidents could be significantly higher as insecurity and logistical challenges prevent our protection monitors from going to some areas,” added UNHCR spokesperson Karin de Gruijl in Geneva, noting that during the first 10 months of 2014, a total of 15,873 incidents have been reported in Katanga, of which over 88 per cent (or 14,057) took place in these four territories.

Sexual violence remains a serious concern, she said, noting that between January and October, UNHCR protection monitors have helped 1,564 people who survived sexual violence and referred them to medical and other partners for help.

“However, as a result of the lack of access to the areas where survivors live and the fear of many of them to report sexual violence, we understand that many more cases are unreported. Due to a lack of funding and the limited capacity of organizations assisting rape survivors in Katanga, only a limited number of them have access to health care, psychosocial support and legal assistance,” Ms. de Gruijl said.

The conflicts are taking place in the northern part of Katanga, one of the Congo’s richest provinces in natural resources. While there have been long-lasting tensions between the two communities, violence between the Luba (or Bantu) and the Twa (or Pygmy) tribes flared up earlier this year, says UNHCR.

Attacks on Twa communities by the secessionist Mai Mai Bataka Katanga militia and fighting with the army reignited after the Mai Mai group’s leader escaped from prison in the provincial capital Lubumbashi in 2011. This has subjected the civilian population to extreme violence, including mass rape.

UNHCR believes that to stem the violence, there is a need to increase the presence of Congolese civil authorities in the affected areas and to look into peaceful solutions to resolve the conflict between the Luba and the Twa.

The rights of minorities and indigenous groups, in particular of the Twa community, should be recognized and protected. At the same time it is important to end impunity and to promote a programme of disarmament, demobilization and reintegration that assists former combatants to return to civilian life.

UNHCR is calling on the UN peace-keeping mission in the Democratic Republic of the Congo (DRC) to reinforce its presence and technical capacity in northern Katanga to better protect the civilian population and prevent further human rights violations. Nearly 2.6 million people are internally displaced in the vast African country. 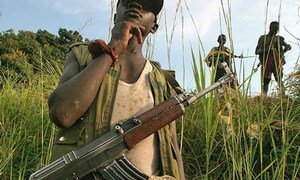 The head of the United Nations peacekeeping mission in the Democratic Republic of the Congo (DRC) – also known by its French acronym MONUSCO – has welcomed the sentencing of a former commander of a militia group accused of war crimes as a step towards reinforcing the rule of law in the war-torn African nation.