IRIN/Rebecca Murray
Cambodia’s landless: a community in the coastal town of Sihanoukville has been forced to live in a ditch after their homes were burnt down by a land developer.

18 November 2014
The United Nations expert on the situation of human rights in Cambodia today urged the Southeast Asian country’s Government to respect the independence of its judiciary after a recent series of arrests and immediate convictions of land activists and opposition party members.

“It saddens me to see the courts being used again and again as a tool of the executive,” UN Special Rapporteur, Surya Subedi, told reporters in Geneva today. “Since I took up this mandate as the Special Rapporteur, I have seen this happen in Cambodia countless times.”

According to Mr. Subedi’s office, the past week has seen the detention and swift sentencing in mass trials of eleven activists accused of taking part in non-violent protests.

Two members of the opposition Cambodia National Rescue Party (CNRP) were also arrested for their part in the violent protests which convulsed the Cambodian capital of Phnom Penh last July and led to the closure of a main plaza known as Freedom Park in the city centre. The clashes left up to 40 people injured, mostly private security guards and resulted in the arrests of five CNRP Members of Parliament-elect and one CNRP activist.

Pointing to the Government’s encroachment on judicial independence, Mr. Subedi voiced concern that Cambodians seeking to exercise their “fundamental freedoms” could be arrested, charged and convicted on what he said were “little or no material grounds.”

“For such cases, justice in the heavily backlogged judicial system can be remarkably swift. In fact, I regret to say that the timing in which these individuals were arrested, charged and convicted, seem to be all well calculated,” he continued.

The Special Rapporteur added that such “arbitrary” violations of rights guaranteed by international human rights law would only serve to diminish public confidence in the country’s institutions and observed that none of the security guards implicated in the multiple deaths and injuries of protesters, including the incidents at Freedom Park, had “yet been called to account.”

Instead, urged Mr. Subedi, the Cambodian Government needed to maintain its country on the path towards reform as “distractions from the critical issues of judicial, electoral, parliamentary and public sector reform only prove their need, not the reverse.”

Appointed by the UN Human Rights Council as the UN Special Rapporteur for Human Rights in Cambodia in March 2009, Mr. Surya P. Subedi serves in his individual capacity and works independently of any government or organisation. 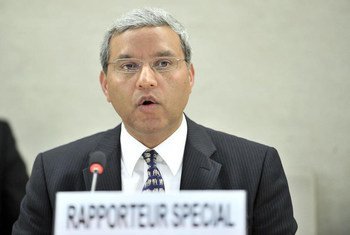 16 July 2014
The United Nations expert on the situation of human rights in Cambodia urged all sides to immediately exercise utmost calm and restraint, and reiterated his call for an end to the official ban on demonstrations.