United Nations Secretary-General Ban Ki-moon has strongly condemned today’s attack on a synagogue in West Jerusalem that claimed four lives and injured several persons, calling for political leadership and courage on both sides to address the “very tense” situation in the region.

In a statement attributed to his spokesperson, the Secretary-General noted that beyond today’s “reprehensible” incident, clashes between Palestinian youths and Israeli security forces continue on a near daily basis in many parts of East Jerusalem and the West Bank.

“The steadily worsening situation on the ground only reinforces the imperative for leaders on both sides to make the difficult decisions that will promote stability and ensure long-term security for both Israelis and Palestinians,” the Secretary-General said.

Extending his condolences to the families of the victims and wishing the injured a speedy recovery, Mr. Ban emphasized that attacks against religious sites in Jerusalem and the West Bank point to an additional dangerous dimension to the conflict which reverberates far beyond the region.

Welcoming the condemnation of today’s attack by Palestinian President Mahmoud Abbas, the Secretary-General stressed that all sides must “avoid using provocative rhetoric which only encourages extremist elements.”

Earlier today, the Special Coordinator for the Middle East Peace Process, Robert Serry, also strongly condemned the attack, calling on all sides to do everything possible to avoid further escalation.

“There can be no justification whatsoever for these deliberate killings,” Mr. Serry stressed in a statement published by his Office today.

Noting that he “abhorred” the attack and that his thoughts are with the families of the victims, the Special Envoy reiterated the UN’s “urgent call on all sides to do everything they can possibly do to avoid further escalation in the already very tense situation in Jerusalem.”

In related news, the UN Office of the High Commissioner for Human Rights (OHCHR) voiced alarm today at the recent series of violent incidents in Israel and the Occupied Palestinian Territory.

“We condemn all acts of violence, which have resulted in deaths and injuries,” OHCHR spokesperson Rupert Colville emphasized in a briefing to reporters in Geneva earlier today.

While Israel has a duty to ensure law and order, including by bringing to justice those responsible for the attacks, any response must be in accordance with international law, the spokesperson said.

“We urge Israeli authorities to refrain from taking measures, such as punitive demolitions, which violate international law and may further inflame the situation,” he added.

Mr. Colville said that in addition to the attack in the synagogue, on Sunday a Palestinian bus driver was found hanged in his bus in Jerusalem in “unclear circumstances.”

At least six other people – including five Israelis and one Ecuadorean – have been killed in the past month in alleged attacks involving cars driven at people and knife attacks, and at least three Palestinian suspects were killed when Israeli security forces reacted to those incidents, the spokesperson said. In response, he said that Israel has reportedly announced that it will demolish or seal six homes of Palestinians allegedly involved in previous attacks.

Meanwhile, OHCHR also continues to follow with concern the “extremely tense and volatile situation” across the West Bank, including East Jerusalem, Mr. Colville said. There are near-daily clashes between Palestinians and Israeli security forces that have resulted in deaths and injuries, including as a result of the use of live ammunition by Israeli security forces, he noted.

“We call on Israelis and Palestinians to exercise restraint, and for all responses to the escalating situation in Israel and the Occupied Palestinian Territory to be grounded in respect for human rights,” Mr. Colville said. 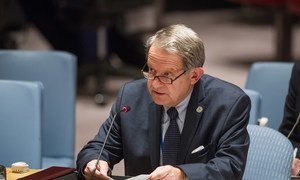 Preventing a further escalation of tensions in the Israeli-Palestinian conflict and returning to negotiations has never been more important, a senior United Nations political official told the Security Council today, calling on leaders from both sides to make the “difficult compromises” that will promote stability and ensure long-term security in the region.