Amid signs of new Ebola cases, UN health official tells Liberians ‘you must hunt the virus’

UNICEF/Cody Griggers
In Liberia, adolescent girls trained by UNICEF and partners are part of Adolescents Leading the Intensive Fight against Ebola, or A-LIFE.
14 November 2014

A senior United Nations World Health Organization official warned reported that the number of Ebola cases in Liberia, which had recently shown some signs of decline, is starting to pick up again, most likely because “people are relaxing their guard.”

“We are seeing taxis full of people again in the streets, and packed. We are seeing people not washing their hands again. We are seeing, most [worryingly], that not every single case is being reported,” Dr. Bruce Aylward, WHO Assistant Director-General for Polio and Emergencies, told the Monrovia-based UNMIL Radio, set up by the UN mission in Liberia.

Dr. Aylward told Liberians that the most recent WHO statistics on Ebola cases show that the number of cases in in their country have “not continued to decline; the case numbers have flattened out now and in some areas, they are starting to go up a bit.”

“It went down and now it’s going back up in some places because people are relaxing their guard,” he said, urging Liberians to renew their offensive against the virus to stop transmission.

“Don’t give the virus the chance to hide anywhere in this country,” he said. “Now you need to hunt the virus,” Dr. Aylward said. “If you don’t do that, it will come back very fast.”

Meanwhile in Geneva, WHO Ebola expert Dr. Martin Friende said vaccine tests were under way and that drug testing was vital, but added that not a lot of the currently available drugs gave reason for optimism.

Dr. Friende also said that there were only a handful of available drug trial sites in Liberia, Guinea and Sierra Leone, the three West African countries affected by the disease.

“What is certain is that we don’t have actually a lot of drugs in our pipeline that look promising, so we have established a working group that will be reviewing drugs on an ongoing basis and trying to find some supportive data,” Dr. Friende said.

He added that while some drugs in development do appear to be effective against Ebola in animal trials, they’re just not available yet in significant quantities.

Meanwhile, the UN Children’s Fund (UNICEF) drew attention to increasing concerns about cases of the abandonment of orphans and unaccompanied children suspected to be infected by Ebola, as sometimes their families were afraid to touch the children in case they had the virus.

Roeland Monasch, UNICEF Representative in Sierra Leone, told reporters in Geneva from Freetown, that as of today there had been 4,744 cases in Sierra Leone, with over 1,000 of them being children and to avoid Ebola spreading into surrounding districts, UNICEF had introduced Community Care Centres and was strongly focusing on community engagement.

UNICEF is seeking to mobilize adult survivors of Ebola to care for those children, as they had a very low risk of catching Ebola again, Mr. Monasch said.

Mr. Monasch, adding that UNICEF was very happy to report that knowledge and awareness is exceptionally high in Sierra Leone – 90 per cent of the 2,000 respondents reported the three main ways of preventing Ebola infection correctly. However, misconceptions, although reduced, remained, for example 36 per cent of the population still believed that bathing in salt water prevented Ebola and only 64 per cent in the community accepted alternative safe burials without the washing or touching of dead bodies.

In a press release, Mr. Monasch announced that 10 new Ebola Community Care Centres are due to open this week in Sierra Leone’s Bombali district as part of a new drive to bring care closer to communities. Built by UNICEF, the tented centres will boost the number of beds in Bombali, one of the districts worst hit by the current Ebola outbreak.

“These 8-bed centres will allow those with the Ebola virus to be isolated within their communities, in a place where they can get basic care, free medicine, safe water and sanitation, and food supplies,” he said. 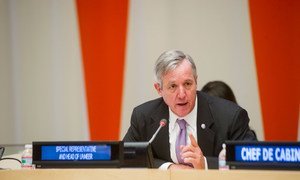 There has been important progress made in the global fight against Ebola but a scaling-up in the overall response remains necessary if the deadly outbreak is to be fully stopped, top United Nations officials told the General Assembly today as they cautioned against complacency in tackling the disease.