WHO/Christopher Black
A child receives the measles vaccine in the Kibati II camp, eastern Democratic Republic of the Congo.
13 November 2014

The United Nations World Health Organization (WHO) warned today that progress towards the elimination of measles has stalled due in large part to outbreaks in China, the Democratic Republic of the Congo and Nigeria, as well as the re-emergence in Europe of the highly contagious virus.

The number of deaths from measles rose from an estimated 122,000 in 2012 to 145,700 in 2013, according to new data published in the WHO Weekly Epidemiological Report and the United States Centers for Disease Control and Prevention’s (CDC) Morbidity and Mortality Weekly Report.

“Poor progress in increasing measles vaccination coverage has resulted in large outbreaks of this highly contagious disease, throwing the 2015 elimination targets off-track,” said Dr Peter Strebel from the WHO Department of Immunization, Vaccines, and Biologicals.

“Countries urgently need to prioritize maintaining and improving immunization coverage. Failure to reverse this alarming trend could jeopardize the momentum generated by a decade of achievements in reducing measles mortality,” Dr. Strebel said.

In developing countries, it costs around $1 to vaccinate a child against the disease, making the measles vaccine one of the best buys in public health. During 2013, 205 million children were immunized against measles through large-scale campaigns in 34 countries, including Cambodia, Cape Verde, Ghana, Jordan, Senegal, and Sudan.

While the increase in the disease in 2013 was in large part due to outbreaks in China, the DRC and Nigeria, sizeable outbreaks were also reported in other parts of the world, WHO said.

Progress is stalled in the WHO Eastern Mediterranean region, where weak health systems, conflict and population displacement have hampered vaccination efforts. Meanwhile, the European region has seen measles re-emerge with outbreaks in a number of countries including Georgia, Turkey and Ukraine.

More than 60 per cent of the estimated 21.5 million children who were not vaccinated against measles at 9 months of age last year came from six countries: India (6.4 million); Nigeria (2.7 million); Pakistan (1.7 million); Ethiopia (1.1 million); Indonesia (0.7 million); and the Democratic Republic of Congo (0.7 million).

The vast majority of deaths from measles occur in developing countries and in 2013 over 70 per cent of estimated global measles deaths occurred in the six countries listed above.

According to WHO’s fact sheet on measles, the disease’s outbreaks can be particularly deadly in countries experiencing or recovering from a natural disaster or conflict. Damage to health infrastructure and health services interrupts routine immunization, and overcrowding in residential camps greatly increases the risk of infection.

WHO said that impressive gains had been made towards measles elimination in recent years and an estimated 15.6 million deaths were prevented through vaccination during 2000-2013 but the huge reductions in mortality are tapering off.

Steve Cochi, Senior Advisor for the CDC’s Global Immunization Division concurs that the resurgence of measles, especially in Africa, is in large part due to a marked decrease in financial support during the global recession.

“This funding gap is only recently being closed and the world’s children cannot afford yet another setback in progress,” Mr. Cochi says.

Measles is a highly contagious viral disease, which affects mostly children. It is transmitted via droplets from the nose, mouth or throat of infected persons. Initial symptoms, which usually appear 10–12 days after infection, include high fever, runny nose, bloodshot eyes, and tiny white spots on the inside of the mouth. Several days later, a rash develops, starting on the face and upper neck and gradually spreading downwards.

There is no specific treatment for measles and most people recover within 2–3 weeks. However, particularly in malnourished children and people with reduced immunity, measles can cause serious complications, including blindness, encephalitis, severe diarrhoea, ear infection and pneumonia. 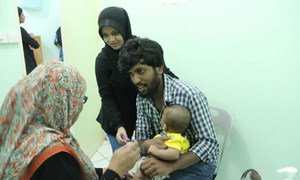 Kicking off annual global immunization campaign, UN asks: ‘Are you up to date?’

While some 80 percent of children around the world, or 110 million infants, are receiving life-saving vaccinations each year, “one in five – more than 22 million children – not being vaccinated is too much for us,” according to the World Health Organization at the start of World Immunization Week 2014.