IRIN/Naresh Newar
In many parts of rural Nepal, women spend on average of five hours a day in smoke-filled kitchens such as these, underming their health.

According to WHO, nearly 3 billion people worldwide still lack access to clean fuels and technologies for cooking, heating and lighting.

And an estimated 4.3 million people worldwide die every year from indoor air pollution emitted by rudimentary biomass and coal cook stoves. They die from strokes, and heart and pulmonary diseases, such as childhood pneumonia and lung cancer. Women and children are particularly vulnerable.

These diseases are primarily caused by high levels of fine particulate matter and carbon monoxide released by the burning of solid fuels such as wood, coal, animal dung, crop waste and charcoal in inefficient stoves, space heaters, or lamps.

“Ensuring cleaner air in and around the home is fundamental to reducing the burden of disease from air pollution, especially in low- and middle-income countries,” says Dr. Maria Neira, WHO Director for Public Health, Environmental and Social Determinants of Health.

The guidelines include emissions targets for different kinds of domestic appliances.

The targets are the result of years of review of the health impacts of household air pollution emissions and careful examination of the levels by which emissions would have to be reduced in order to meet WHO guidelines for air quality.

“If the new emission targets are met, then some 90% of homes globally will meet WHO’s air quality standards,” said Dr Neira.

In homes with open-burning and unvented coal or biomass stoves, emissions of particulate matter and other pollutants can be 100 times higher than WHO-recommended levels. Such pollutants are carcinogenic and cause heart and lung disease.

Dr. Flavia Bustreo, WHO Assistant Director General, Family, Women’s and Children’s Health cluster, said: “Women and young children, who spend the most time near the domestic hearth, are particularly vulnerable.

“Globally, more than 50 per cent of pneumonia deaths among children under 5 are linked to household air pollution,” Dr. Bustreo said.

Women and children may also suffer other consequences, according to WHO. “In many regions, they spend hours every day gathering fuel for traditional stoves, restricting time for earning money and going to school,” the WHO press release said.

In order to meet the new targets, Dr. Carlos Dora, WHO Coordinator for Public Health, Environmental and Social Determinants of Health, said “there needs to be rapid scale-up in access to cleaner and more modern cooking and heating appliances, as well as lamps, in developing country homes.”

“And clean technologies and fuels should be priced within reach of the lowest-income households.” Dr. Dora said.

WHO said its regional and country offices will support governments, non-governmental organizations, the private sector and development partners to implement these guidelines. 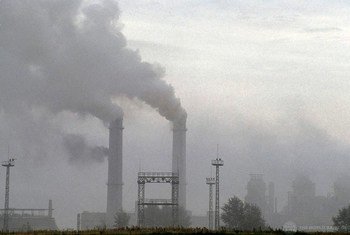 8 May 2014
Many of the world’s cities are “enveloped in dirty air” that is dangerous breathe, the United Nations World Health Organization (WHO) said today, warning that urban dwellers are being exposed to excessive air pollution and are at a risk of respiratory diseases and other long-term health problems.