“Discrimination against minorities and vulnerable groups, and violence against women are serious challenges in the region,” Mr. Ban told the Sixth ASEAN-UN Summit, held in Nay Pyi Taw, Myanmar.

“Civil society has a crucial role to play in this effort and I encourage you to ensure the space and the freedoms such groups and organizations need to contribute to these national efforts,” he added.

Welcoming Myanmar’s increased role in regional and international affairs, Mr. Ban said the country will face “critical benchmarks” as it prepares for a general election in 2015.

“I congratulate Myanmar on its achievements, including ambitious reforms aimed at improving the lives of its people,” he said. “The Government and people of Myanmar can count on the support of the United Nations as they continue the process of democratization, development and national reconciliation.”

On human rights, the Secretary-General said he looked forward to ASEAN strengthening its monitoring and protection mandate and its human rights mechanisms, including the ASEAN Intergovernmental Commission on Human Rights. 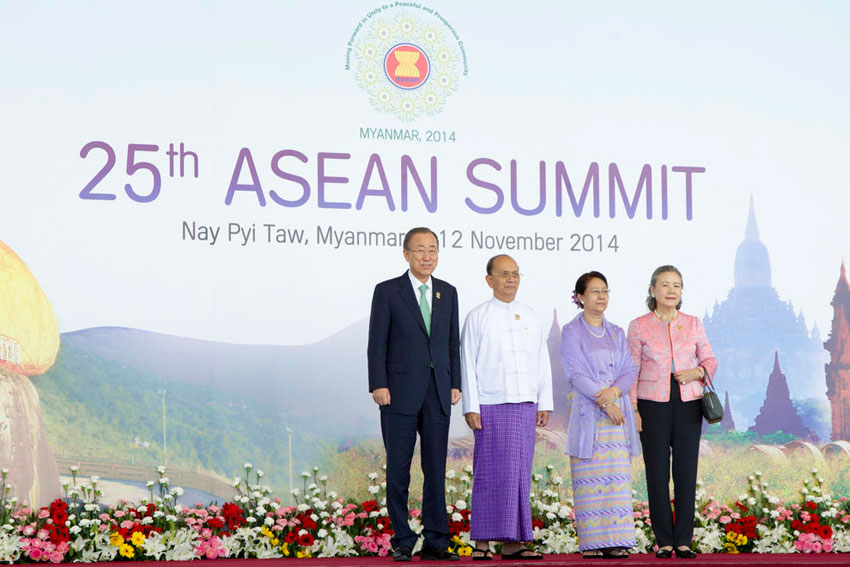 Secretary-General Ban Ki-moon (left) and wife Yoo Soon-taek (right) with President Thein Sein, of the Republic of the Union of Myanmar, and wife Khin Khin Win, at the opening of the 25th ASEAN Summit in Nay Pyi Taw, Myanmar. UN Photo/Rick Bajornas 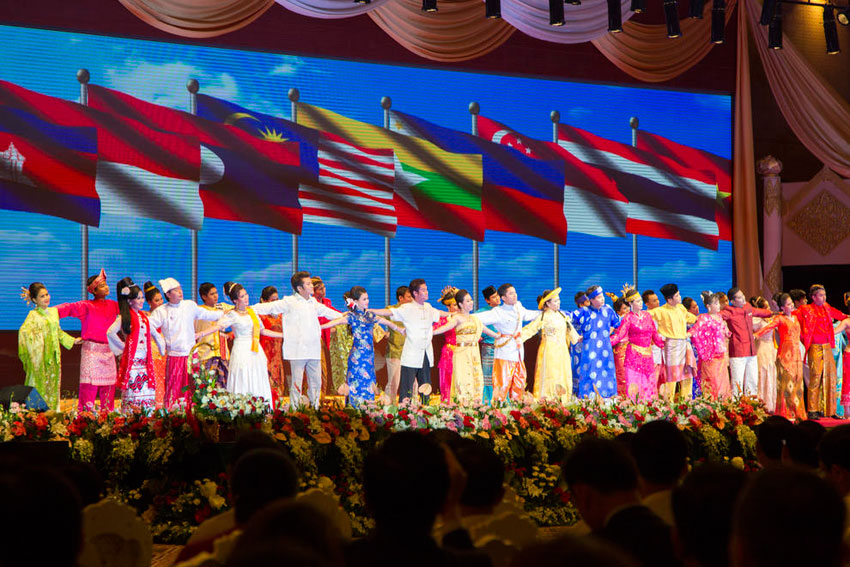 A view from the the opening ceremony the 25th ASEAN Summit hosted by Myanmar in the capital Nay Pyi Taw. UN Photo/Rick Bajornas 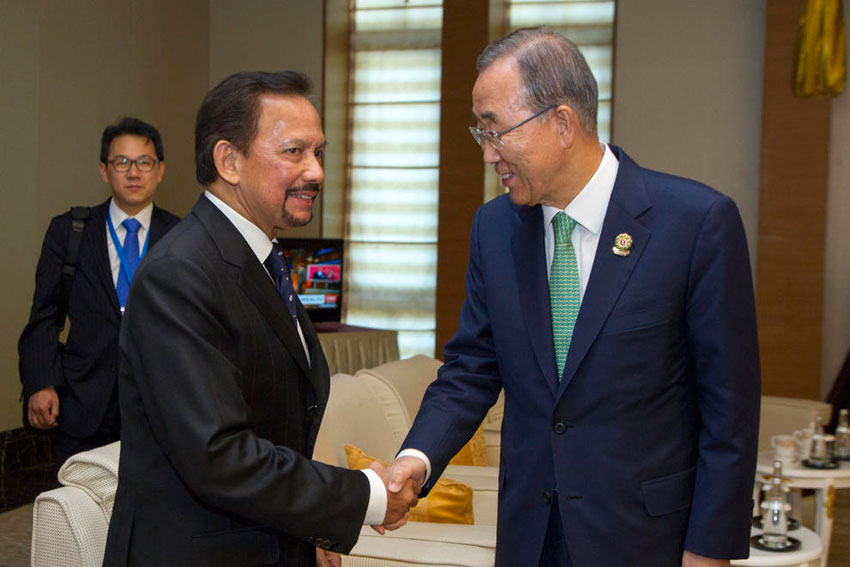 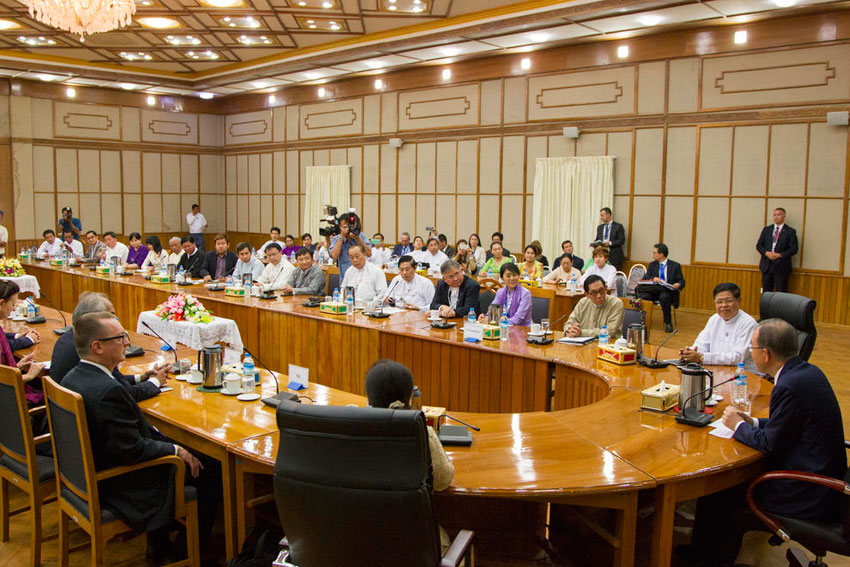 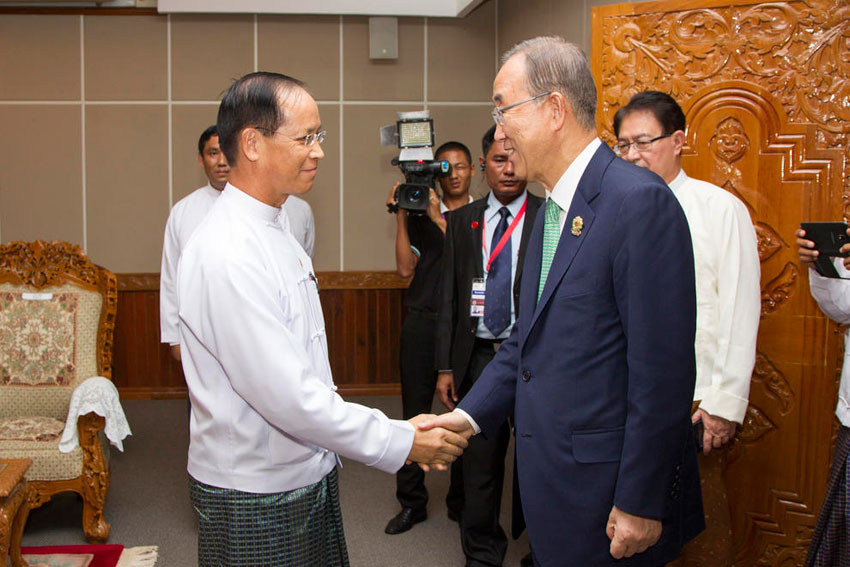 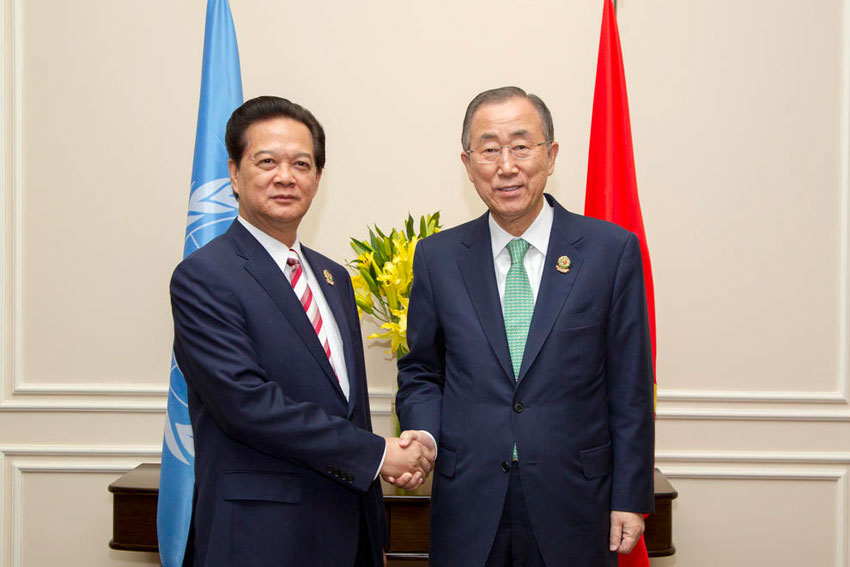 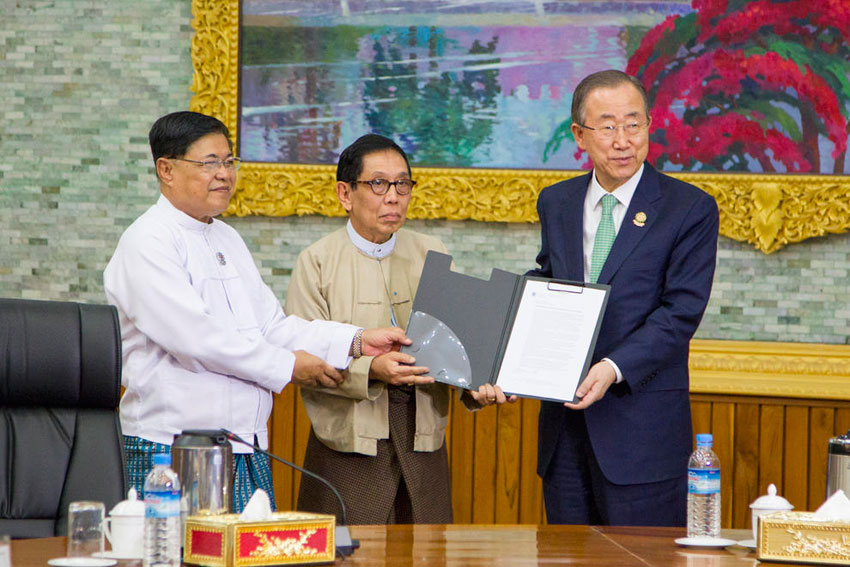 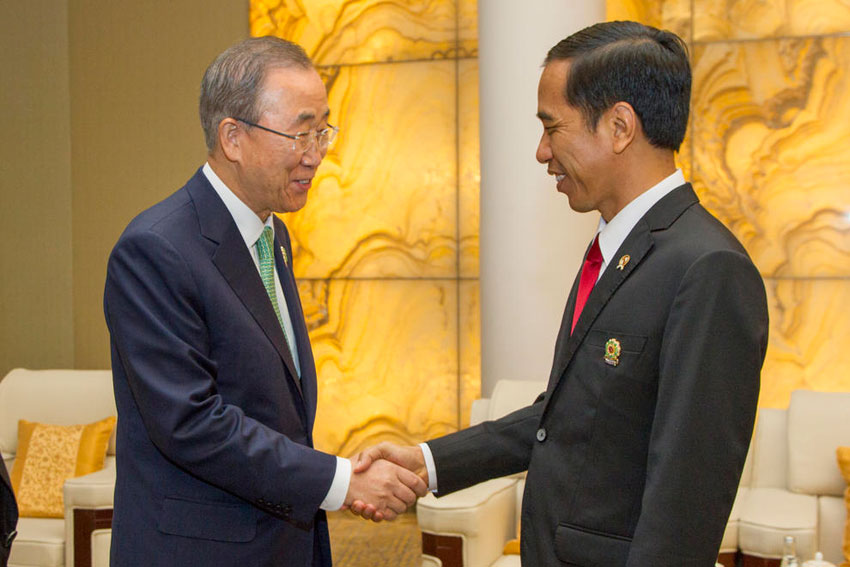 Mr. Ban also stressed that as the UN strives to address the multiple crises occurring around the world, such as the Ebola outbreak in West Africa, the conflict in Syria and Iraq, or the threat of famine in South Sudan, it counts on the support of its Member States and regional organizations such as ASEAN.

Furthermore, the Secretary-General said, intolerance, extremism and radicalization are on the rise, including in some countries in the ASEAN region, with ordinary women, men and children paying the highest price. As such, he looks forward to continuing to work with all ASEAN Member States for peace, human rights and development across Southeast Asia.

“Seventy years after the adoption of the UN Charter, this is a moment to join hands and renew our commitments to peace and security, human rights and development,” Mr. Ban said, adding that “2015 will a crucial year for the international community to usher in a new era of sustainable development as we reach agreement on a post-MDG [Millennium Development Goals] agenda and its financing.”

Along those lines, the Secretary-General underscored in a press conference later in the day that the leaders of ASEAN and East Asia had gathered for the Summit at “a time of test for the international community.”

In particular, Mr. Ban said he is concerned that historical tensions and competing territorial claims “could hold the region back,” although he is encouraged by recent steps to enhance dialogue, which he hopes will prevent “any needless escalation.”

“Leaders have a responsibility to resolve their disputes peacefully, through dialogue,” he stressed. “An Asia that can overcome legacy issues and look to a shared future will be even better placed to advance prosperity for all.”

Turning to Myanmar, Mr. Ban noted that the process of democratization in the country is at a “defining moment” and that the election next year will be crucial for its future.

Commending efforts on the part of the Myanmar Government to implement an “ambitious reform agenda,” the Secretary-General said he will meet with President Thein Sein tomorrow.

In meetings with senior officials earlier today, Mr. Ban said: “I also expressed my concern about the Rohingya population, who face discrimination and violence. I encouraged the leaders of Myanmar to uphold human rights, take a strong stance against incitement and ensure humanitarian access to Rohingya living in vulnerable conditions.”

“At a time of rising extremism and intolerance in many countries, progress on this front in Myanmar would keep that country’s transition on track and send a positive message to the world,” Mr. Ban stressed.

Secretary-General Ban Ki-moon today called for enhanced partnership between the United Nations and the Association of Southeast Asian Nations (ASEAN), as the two bodies work together for peace, human rights and sustainable development across the region.