The 2014 Afghanistan Opium Survey found that opium production may potentially increase 17 per cent, with yields estimated to reach 6,400 tons in 2014 compared to the previous year's total of 5,500 tons. This is largely attributed to a strong increase in yields reported in the Southern region, which accounts for sixty-nine per cent of national production.

“The illicit opium economy and related criminality and corruption continue to undermine security, the rule of law, health and development in the region and beyond,” he added.

Afghanistan produces some 90 per cent of the world's illicit opiates. Hilmand province, in the south, remains the country's major opium cultivating area, followed by Kandahar, Farah and Nangarhar. In Hilmand where the “food zone” alternative livelihood programme ended in 2012, opium cultivation rose by 13 per cent.

The annual survey released by the UNODC and the Afghan Ministry of Counter-narcotics found that total eradication decreased by sixty-three per cent to two thousand, six hundred and ninety-two hectares, as governor-led poppy eradication campaigns were less active in all regions, amid an unfavourable security situation.

“A balanced approach to drug control must be mainstreamed in development, peace and security efforts in Afghanistan – and this in a tangible and realistic manner,” Mr. Fedotov said.

This support must include providing licit livelihoods as an alternative, as well as evidence-based prevention and treatment services to deal with a growing addiction problem in the country that is hurting young people in particular. It is also important to strengthen deterrence by supporting counter-narcotics authorities and countering drug trafficking networks, he added.

“I hope that as we move beyond the 2014 transition, Afghanistan and its international partners can work together to help ensure that an integrated, comprehensive response to the drug problem is part of the long-term security and development agenda for the country,” Mr. Fedotov said. 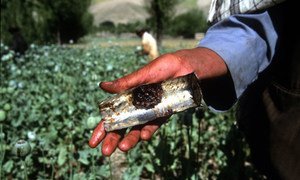 Visiting Kabul over the weekend, the head of the United Nations agency combating all forms of criminal activity, met with newly-elected President Ashraf Ghani and Chief Executive Abdullah Abdullah and pledged support to counter the harmful effects of illicit drugs, organized crime and corruption on Afghanistan and its people.