According to a press release, Mr. Uteem, a native of Mauritius, will bring his many years of political and diplomatic experience to his new role which will begin with the start of MENUB’s operations on 1 January 2015.

Mr. Uteem served as President of Mauritius from 1992 to 2002 after holding various ministerial appointments within his country. In addition to his notable political career, he is credited for having promoted his country’s “Unity in Diversity” policies which, according to the press release, “succeeded in establishing national unity and a stable inclusive democracy in a multi-ethnic, multi-religious society.”

The UN Security Council set the creation of MENUB in motions in February following the Burundi Government’s request for a UN-backed electoral observer mission before, during and after Burundi’s upcoming 2015 elections.

It will replace the UN Office in Burundi (BNUB) which was set up in 2006 following a ceasefire between the Government and the last remaining rebel forces to support peace consolidation, democratic governance, disarmament and reform of the security sector. BNUB wraps up its mandate at the end of the year.

Burundi was the first country, along with Sierra Leone, to be put on the agenda of the UN Peacebuilding Commission (PBC), which was also established in 2006, to ensure that countries once ravaged by war do not relapse into bloodshed.

Joining Mr. Uteem at MENUB will be Issaka Souna of Niger, who will function as the Mission’s Deputy Head. Mr. Souna has been the Minister of Justice as well as a former President of the Bar of his country and has also worked with the UN Office in West Africa (UNOWA) and the UN Development Programme (UNDP). From August 2011 to December 2012, he also served assignments in elections observation in Madagascar. 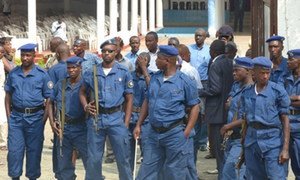 Noting the current stability in Burundi’s security situation, two United Nations officials briefing the Security Council today urged vigilance, but expressed confidence that the Government would continue on a path towards peace in the run-up to elections in 2015.