10 November 2014
After being granted access yesterday to investigate allegations of the mass rape of 200 women and girls in a town in North Darfur, Sudan, the African Union-United Nations hybrid mission has said that its team found no evidence confirming the claims and received no information regarding the purported acts.

In a press statement today, the African Union–UN Hybrid Operation in Darfur (UNAMID), said that, after receiving access, its verification team – which included representatives from police, military and civilian components – spent several hours yesterday touring Tabit village and interviewed a range of the residents, to ascertain the veracity of media reports this past week alleging the mass rapes.

“None of those interviewed confirmed that any incident of rape took place in Tabit on the day of that media report,” UNAMID said in its statement.

“The team neither found any evidence nor received any information regarding the media allegations during the period in question,” UNAMID added.

Further to the statement, village community leaders reiterated to UNAMID that they “coexist peacefully” with local military authorities in the area. The team also interviewed the local Sudanese Armed Forces Commander.

UNAMID said it intends to conduct “further follow-up actions on the matter,” including possible additional investigations and patrols, in coordination with relevant host authorities and in accordance with the Status of Forces Agreement between the Government of Sudan and UNAMID.

This past week, UNAMID expressed deep concern about the allegations of mass rapes in Tabit, which is located 45 kilometres south-west of El Fasher, in North Darfur, declaring that it would conduct a thorough investigation into the veracity of the claims. 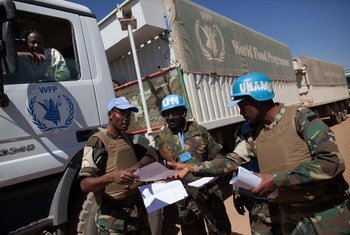 5 November 2014
The African Union-United Nations hybrid mission in Darfur (UNAMID) has expressed its “deep concern” about allegations circulating in local media over the mass rape of 200 women and girls in a town in the region’s North, declaring that it is conducting a thorough investigation into the veracity of the claims.