IRIN/Manoocher Deghati
Opium harvest in a poppy field in Badakhshan, Afghanistan. Raw opium is cooked before being suitable for smoking.
10 November 2014

Visiting Kabul over the weekend, the head of the United Nations agency combating all forms of criminal activity, met with newly-elected President Ashraf Ghani and Chief Executive Abdullah Abdullah and pledged support to counter the harmful effects of illicit drugs, organized crime and corruption on Afghanistan and its people.

The Executive Director of the UN Office on Drugs and Crime (UNODC), Yury Fedotov during his meeting with Afghanistan’s political leadership also discussed how to enhance the long-standing relationship between Afghanistan and UNODC, said a press release.

The Executive Director acknowledged that illicit drugs have had a “disastrous” impact on the country. According to UNODC, Afghanistan suffers one of the world’s highest prevalence rates for opiate use and HIV and hepatitis are widespread among injecting drug users.

At present, more than one million Afghans are drug dependent. Poppy cultivation and production have also increased rapidly in Afghanistan in recent years.

There has, however, been progress, most notably in the capacity of local authorities to counter drug trafficking, corruption, money laundering and terrorism, as well as the provision of essential drug treatment and rehabilitation services.

Afghanistan has also worked hard on its engagement with neighbouring countries. UNODC will continue to use its integrated country and regional programmes to focus on illicit financial flows, to undertake research and analysis of the problem and to offer strong technical support to government bodies.

But it was also recognized that any successful response must be regional and international in its scope and ambition, and connected to the country’s social and economic development, the statement said. 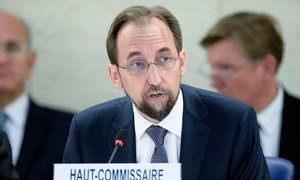 The scheduled executions set for tomorrow of five Afghans accused of armed robbery and gang rape is being criticized by the United Nations human rights chief, who today reiterated his calls for a stay to allow a judicial review and ensure that the right to a fair trial is upheld.