The United Nations human rights office today voiced deep concern about a recent Dominican Constitutional Court’s ruling that the country’s recognition of the competence of the Inter-American Court of Human Rights is unconstitutional.

“This ruling may jeopardize the capacity of Dominican people to protect their rights, and deny them a system of protection designed to complement the Dominican legal framework and institutions,” said Rupert Colville, spokesperson for the Office of the UN High Commissioner for Human Rights (OHCHR), in a press briefing in Geneva today.

Two weeks ago, the Inter-American Court of Human Rights ordered the Dominican Republic to revoke a judgement issued in September 2013 saying that the children of undocumented migrants who have been in the country and registered as Dominicans as far back as 1929 cannot have Dominican nationality, as their parents are considered to be “in transit.”

According to media reports, earlier this week the Constitutional Court said that when the Dominican Republic joined the jurisdiction of the regional court in 1999, it had done so without respecting its own constitution.

Mr. Colville stressed that regional human rights bodies, such as the Court and the Inter-American Commission on Human Rights, play “a very important role” in the promotion and protection of human rights in the region.

“The Inter-American Court is a highly respected body,” he declared.

“It has been crucial, in its 36 years of existence, in obtaining justice and reparation for large numbers of victims of human rights violations and in prompting legal, policy and institutional reform throughout the Americas. Its jurisprudence has set standards on issues such as reparations, amnesties, indigenous peoples, discrimination, and the State’s responsibility to protect individuals from violations, which have greatly influenced the development of the universal human rights system as well as other regional systems,” the spokesperson added.

Mr. Colville also noted that OHCHR was “confident” that the Government of the Dominican Republic will “reconfirm its commitment with the regional human rights protection system.”

Until 2010, the country had followed the principle of automatically bestowing citizenship to anyone born on its soil. But in 2010, a new constitution stated that citizenship would be granted only to those born on Dominican soil to at least one parent of Dominican blood or whose foreign parents are legal residents.

♦ Receive daily updates directly in your inbox - Subscribe here to a topic.
♦ Download the UN News app for your iOS or Android devices.
Dominican Republic 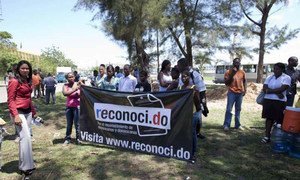 A group of United Nations human rights experts on the African diaspora today called on the Government of the Dominican Republic to adopt the necessary legal measures to restore Dominican citizenship for all those born in the country, but not registered at birth.