UNSMIL/Abbas Toumi
Shoppers at a market in the Libyan capital Tripoli.
6 November 2014

The United Nations Support Mission in Libya (UNSMIL) said today that it is closely monitoring the situation in the North African country, following a Supreme Court ruling that declared the national Parliament unconstitutional.

In a statement to the press, UNSMIL emphasized the need for political consensus at this “critical moment” and called on all parties to place the national interest above all other considerations.

The Mission said it is reviewing the decision made by the Supreme Court and in turn rejected by the Parliament, while it consuls closely with Libyan stakeholders across the political spectrum, as well as with international partners.

The Libyan Parliament, elected on 25 June, was welcomed by the United Nations mission in the hopes that the politicians could lead the nation away from the strife characterized by violence in Tripoli and Benghazi.

Parliamentarians were seen as leading the efforts to create an inclusive political dialogue and in “taking the necessary steps to safeguard the security, safety, unity and sovereignty of Libya,” the Mission stated at the time.

The country has been embroiled in some of the worst fighting since the 2011 uprising that ousted former leader Muammar al-Qadhafi and set it on a path to democratic transition.

Today, the UNSMIL reiterated its commitment to Libya’s sovereignty, independence and territorial integrity. The UN also reiterated the need for everyone to act responsibly and “desist from taking any action that would escalate the existing polarisation” or result in a further deterioration of security.

In accordance with its mandate, the Mission said it remains committed to working with all parties to help Libya overcome the current political and security crisis. UNSMIL emphasises the urgent need for all parties to forge consensus on political arrangements regarding the transition.

In this regard, Special Representative of the Secretary-General Bernardino Leon will confer with all the main stakeholders on the way forward. 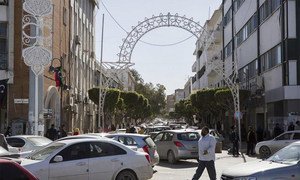 The Libyan parliament convened for the first time today, a move welcomed by the United Nations mission assisting the country which said it hopes that the politicians can lead the north African nation away from continuing bloody battles in Tripoli and Benghazi.