UNAMID/Albert González Farran
In the Abu Shouk camp for internally displaced persons (IDP) in Darfur, a child gets a drink of water.
6 November 2014

The most basic of all human rights – water – is also a central element in global affairs and the development agenda with wide implications on international peace and security, the Deputy Secretary-General told participants today the World Water Summit held in London.

“Around today’s world, we see how a lack of access to water can fuel conflict and even threaten peace and stability,” Jan Eliasson pointed out as he delivered the keynote address on “Tackling the Global Water Challenges: What’s Next?,” to the Summit, which was organized by The Economist.

The Summit features several presentations and panels including on the challenge of urbanization, sustainable approaches to agriculture and sanitation and a senior-level discussion on water security.

Participating in the Summit are ministers of water and the environment from Uganda, Singapore, and Mongolia, as well as representatives of non-governmental organizations, the private sector and several publications.

During his address, the Deputy Secretary-General recalled seeing water used as a weapon of war during the Darfur conflict in Sudan.

“On one trip in 2007, to the North of Darfur as we arrived in a village, we were met by a group of women chanting, ‘Water, water, water.’ The enemy militia had poisoned their well, they said,” Mr. Eliasson told Summit participants.

And most recently, the Islamic State of Iraq and the Levant (ISIL) has also exploited access to water to expand its control over territory and to subjugate the population. And from Tajikistan to Ethiopia, upstream/downstream tensions related to large hydroelectric projects remain an issue.

But water tensions are not exclusive to conflict ridden and developing countries alone. In recent years, the world has witnessed a surge of water-related crises from the dried up eastern basin of the Aral Sea to the unprecedented three-year drought in California.

In addition, rapid urbanization has put huge pressure on water use and infrastructure, making water an increasingly scarce and expensive resource, especially for the poor and marginalised.

“Let me share with you some numbers. Demand for water is projected to grow by over 40 per cent by 2050. An estimated 1.8 billion people will soon live in countries or regions with water scarcity,” the Deputy Secretary-General said.

There is good news, however. Thanks to global mobilization inspired by the Millennium Development Goals (MDGs), two billion people have benefited from access to improved water sources, a result of smart investments and policies.

“Still, let us remember that 750 million people today do not have access to safe drinking water,” said Mr. Eliasson.

Roughly 80 per cent of global water is discharged in untreated ways into oceans, rivers and lakes. Nearly 2 million children under the age of five die every year for want of clean water and decent sanitation. One billion people in 22 countries still defecate in the open, said Mr. Eliasson, adding that the UN on 19 November will celebrate the first ever official World Toilet Day.

“We want to break the silence and taboo surrounding toilets and open defecation. These words must be natural elements of the diplomatic discourse on development,” he added.

Recalling that sanitation was “nowhere to be found” in the initial MDGs but is now one of the proposed Sustainable Development Goals (SDGs) for the period 2015-2030 because “experience has shown that sanitation and sound hygiene practices are critical drivers of development,” Mr. Eliasson added.

He appealed to the private sector to engage actively with UN Global Compact– the world body’s main corporate sustainability initiative – which has already committed more than 125 companies to advancing corporate water stewardship and better sanitation practices.

“Corporate engagement on sanitation ensures healthy work-forces and societies. Sanitation is also a business opportunity, as there are millions and millions of people in need,” he said.

Tensions over water will clearly be exacerbated by climate change but “we must not lose site of the opportunities that water offers as a source of cooperation”. Water can and should drive cooperation and conflict resolutions.

Over 90 per cent of the world’s population lives in countries that share rives and lake basins with potential for shared management. Almost 450 agreements on international waters were signed between 1820 and 2007.

He called for smarter water management approaches, better waste management to protect rivers and more creative use of technology to “explore the frontiers” of desalination. Global partnerships are critical as well.

“No single Government can implement the water agenda alone,” the Deputy Secretary-General added. 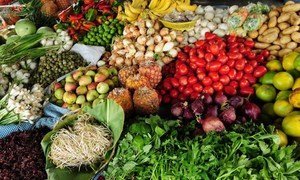 In order to move towards more sustainable agriculture, a broader approach is needed to overhaul the world’s food system, the head of the United Nations Food and Agriculture Organization (FAO) said today, as he pressed for a global reduction in the quantity of chemicals and water in contemporary agriculture.