As the United Nations warned today that the Ebola outbreak is deepening the socio-economic challenges faced by the hardest hit countries in West Africa, the World Bank's private sector arm, the International Finance Corporation (IFC), announced a package of some $450 million in commercial financing that will enable trade, investment, and employment in Guinea, Liberia and Sierra Leone.

The announcemnt by the IFC/World Bank Group also noted that if the virus continues to surge in the three worst-affected countries and spreads to neighbouring States, the two-year regional financial impact could reach $32.6 billion by the end of 2015.

The UN Development Programme (UNDP), meanwhile, also warned that the Ebola outbreak is impairing the ability of the governments of the frontline countries to raise revenues, increasing their exposure to domestic and foreign debts and may make them more dependent on aid. In just six months, the outbreak has led to severe loss in household incomes, totalling 35 per cent in Liberia, 30 per cent in Sierra Leone and 13 per cent in Guinea.

The UN World Health Organization (WHO), in its most recent statistics on the crisis, reported 13,042 cases in Guinea, Liberia, Mali, Sierra Leone, Spain and the United States, as well as in two previously affected countries, Nigeria and Senegal. WHO said the death toll now stood at 4,818.

The agency noted that all districts in both Sierra Leone and Liberia have now been infected and that “in Sierra Leone, the weekly incidence continues to rise, while in Liberia it appears to be declining.” Cases and deaths continue to be under-reported in this outbreak, according to the UN health agency.

Spain – where all 83 contacts of the health-care worker infected in Madrid have completed the 21-day follow-up period – “will therefore be declared free of EVD [Ebola Virus Disease] 42 days after the date of the second negative test if no new cases are reported,” WHO said.

Jim Yong Kim, President of the World Bank Group, said “Ebola is a humanitarian crisis first and foremost, but it's also an economic disaster for Guinea, Liberia, and Sierra Leone. That's why in addition to our emergency aid we will do all we can to help support the private sector in these countries to build back their businesses."

The IFC initiative includes a program begun in October to reach 800 small and medium enterprises in Guinea, Liberia, and Sierra Leone to help ensure business continuity during the crisis. The program will provide medical and hygiene supplies; related literature; and training on preventive measures.

The World Bank Group said it is mobilizing nearly $1 billion for the three countries hardest hit by the Ebola crisis.

"The fear swirling around Ebola has the potential to do long-term harm to businesses globally, and especially in the Ebola-affected countries,” Mr. Kim said.

“Our private sector arm – IFC – will find ways to help boost trade and investment in West Africa, which will be essential to ensure that private companies continue to operate and sustain employment under difficult circumstances,” he said.

Commenting on the UNDP study, Abdoulaye Mar Dieye, UNDP Director of the Regional Bureau for Africa, warned: “We need to make sure that the Ebola outbreak does not lead to socio-economic collapse.”

Because of Ebola, government expenses have risen by about 30 percent in all three countries and fiscal deficits are rising, according to the study.

Liberia has had to sacrifice $20 million-worth of infrastructure development and Sierra Leone $16 million, since the beginning of the crisis. Guinea has just revised its budget to reflect the new reality imposed by the outbreak of the virus.

Exports of fruit and vegetables from the Northeast of Guinea to neighbouring countries have been down 90 per cent.

The UNDP study also urges governments and national and international partners to continue investing in development activities and make sure every dollar spent on tackling the emergency is an opportunity to invest back in the community and economy for the long haul.

Guinea, Liberia and Sierra Leone had experienced encouraging rates of economic growth over the past 10 years – at 2.8, 10 and 8 percent respectively – sustained by mining, forestry, agriculture and services.

Also today, WHO announced the nomination of Dr. Matshidiso Moeti, of Botswana, as the next WHO Regional Director for Africa.

Speaking after her nomination, Dr. Moeti pledged to work for and with every member State to address the health challenges facing Africa. She is scheduled to take up her new post on 1 February 2015. 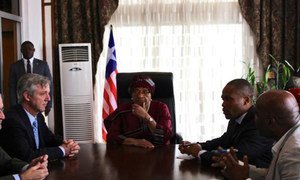 Ebola: UN envoy warns against letting guard down, ‘even for a second’

The UN envoy coordinating the global response to the Ebola outbreak in West Africa said in the Liberian capital today that when national governments, partners and communities work together, “dramatic improvement” can be achieved, but cautioned against “even for a second [thinking] that everything is okay.”