As a joint United Nations and African diplomatic mission continues its consultations with Burkinabé stakeholders amid a constitutional crisis in the West African country, Secretary-General Ban Ki-moon today reiterated his call for dialogue and voiced hope for Burkina Faso’s speedy return to a democratic process, a United Nations spokesperson has confirmed.

“The Secretary-General reiterates his call for inclusive dialogue to continue, and encourages all parties to reach an agreement for a peaceful and civilian-led transition as soon as possible,” said UN spokesperson Stéphane Dujarric, briefing the press at UN Headquarters this afternoon.

The Secretary-General’s Special Representative for West Africa, Mohammed Ibn Chambas, arrived in Ouagadougou, Burkina Faso’s capital, on 31 October as part of a joint mission that also includes the President of the Commission of the Economic Community of West African States (ECOWAS) and the African Union Commissioner for Political Affairs.

In addition, Mr. Dujarric noted the Secretary-General’s appreciation for the mission undertaken by President John Mahama of Ghana, President Goodluck Jonathan of Nigeria and President Macky Sall of Senegal, who arrived in the Burkinabé capital today to join mediation efforts by the joint UN, African Union and ECOWAS delegation.

“The joint UN-AU-ECOWAS mission is continuing its consultations with all the parties and other forces to ensure a democratic and civil-led transition in Burkina Faso,” continued the spokesperson.

“And it will continue its efforts to help resolve the crisis in line with the national constitution.” 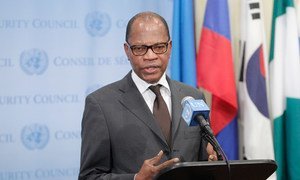 Reiterating his great concern for the current crisis in Burkina Faso and its impact on national and regional stability, Secretary-General Ban Ki-Moon said the joint United Nations and African diplomatic mission sent to the conflict-ridden country last week has returned to the capital city of Ouagadougou to continue its engagements with all parties, with the objective of reaching an agreement that restores constitutional order through democratic elections.