Following a spate of deadly violence at the Kakuma refugee camp in Kenya, the United Nations refugee agency (UNHCR) today voiced concern about the security situation in the overcrowded settlement, urging a return to calm for all the communities sheltered there.

At a press briefing in Geneva, UNHCR spokesperson, Adrian Edwards, told reporters that a series of “sporadic disturbances” at Kakuma had already claimed the lives of eight refugees from Burundi, the Democratic Republic of the Congo, and South Sudan over the past week.

According to the agency, the violence began last Tuesday when reports of the attempted rape of a refugee child sparked fighting among rival groups of South Sudanese youths, leading to the death of one person. The situation further degenerated over the weekend when youths went on a rampage after another child was hit by a motorcycle taxi. The driver, a Burundian refugee, was set upon by the crowd and sustained machete wounds to the head and arms.

Mr. Edwards noted that fear of the violence spread throughout the camp, prompting many refugees to move their families to nearby police posts until security personnel could calm the situation and conduct a thorough weapons search. However, he added, the situation deteriorated once again yesterday morning when four more refugees were killed.

“Together with the Kenyan authorities, we are continuing to work with the refugees to restore calm, and appealing for calm and peaceful coexistence among all communities in the camp,” Mr. Edwards continued.

Kakuma has been described as a “melting pot” as it provides shelter for 180,000 refugees from more than 20 countries. At the same time, UNHCR warns that it is perilously overcrowded and additional land for expanding the camp is “urgently needed.” 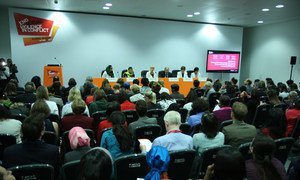 Noting that sexual violence in conflict remains widespread, yet largely invisible, Secretary-General Ban Ki-moon today called for concerted efforts to “turn the tide” and rid the world of this scourge.