The United Nations-backed mechanism designed to provide war-ravaged Gaza with reconstruction materials for urgent shelter repairs has commenced its operations, a senior UN official in the region has announced.

According to a statement released today by the UN Special Coordinator for the Middle East Peace Process, Robert Serry, some 700 beneficiaries are finally able to purchase “much needed” construction material in order to start the rehabilitation of their homes after the recent 51-day conflict saw entire neighbourhoods flattened and almost one-third of Gaza's population uprooted.

“The United Nations continues to mobilize every effort to ensure this mechanism works for the benefit of Palestinians in Gaza and at a scale that will address Gaza’s massive reconstruction needs,” Mr. Serry said, referring to the UN-brokered temporary initiative agreed between the Palestinian and Israeli sides with the overall objective of enabling construction and reconstruction work at the large scale now required in the Gaza Strip.

He added that it was “essential” for the implementation of the mechanism, administered by the Palestinian Government of National Consensus, to be “urgently accelerated” in order to reach some 60,000 shelters in need of repair involving the use of cement or other “dual-use materials” as the winter season fast approaches.

Mr. Serry observed that if reconstruction were to be implemented at the “required pace,” the Palestinian Government of National Consensus “must also be empowered to assume its rightful responsibilities in Gaza.” As a result, he urged all parties to cooperate and “urgently address important issues,” such as the transfer of full control over crossings to the Government.

“In absence of viable alternatives, the UN views the temporary reconstruction mechanism as an important step towards the lifting of all closures on Gaza,” the Special Coordinator continued.

“With the mechanism becoming operational, it is all the more important for donors to honour their pledges at the Cairo conference to fund much needed infrastructure projects and to address the urgent electricity and water needs for Gaza.”

The Cairo conference, held on 12 October in the Egyptian capital, saw pledges amounting to about $2.1 billion for early recovery and reconstruction efforts under the auspices of the “UN Support Plan for the Transformation of the Gaza Strip.” 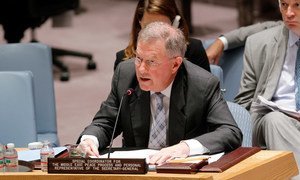 With the Egyptian-brokered ceasefire holding in the Gaza Strip, the United Nations has reached agreement with Israel and Palestinian Authority on a new reconstruction mechanism for the enclave as “an important step” in the right direction to kick start recovery and rehabilitation and give hope to the people there, a senior UN envoy announced today.