As civil conflicts, terrorism, illegal drug trafficking, a rise in divisive politics, and health crises such as Ebola continued to transcend borders and threaten millions of people worldwide, United Nations partnerships with regional organizations were ever more vital to deal with and adapt to such challenges, Secretary-General Ban Ki-moon said today as he addressed the Permanent Council of the Organization for Security and Co-operation in Europe (OSCE) in Vienna, Austria.

Speaking on the eve of the 25th anniversary of the fall of the Berlin Wall, the Secretary-General stressed that he has continued to deepen ties between the UN and the OSCE, as enshrined in Chapter VIII of the UN Charter, and commended the OSCE for its active engagement and prominent role in addressing today’s challenges and helping to set the stage for a new era of international cooperation.

“A quarter of a century later, we are still wrestling with much unfinished business and striving to ward off the return of Cold War ghosts to haunt our times,” Mr. Ban said.

“We are a world in transition. New powers are emerging. Urbanization and migration are on the rise. We are striving for a more sustainable and equitable path of development. Distinctions between the national and the international are falling away. At the same time, the global security landscape is shifting dramatically,” he added.

Describing strife-torn Ukraine as a matter that “remains a deep concern and which has created divisions that stretch beyond the region,” the Secretary-General once again urged all concerned parties to urgently recommit to full implementation of the Minsk Protocol and Memorandum, and praised the OSCE for its early and active engagement and its prominent role on the ground.

“In addition to the tragedy of lost lives both on land and in the sky, the crisis risks jeopardizing our collective ability to solve global problems,” the Secretary-General said.

Reiterating that the “elections” in the eastern part of the country this past Sunday were an “unfortunate and counterproductive development, Mr. Ban stressed that the UN and the OSCE had “a common responsibility to defuse tensions – and we have been working hand-in-hand.”

In that context, Mr. Ban noted that UN mediation advisors had provided technical support to the OSCE Special Monitoring Mission in Ukraine, and that the UN was committed to work together with the OSCE and other international actors to provide long-term support to Ukraine to resolve the deep-rooted issues underlying the crisis.

“Our organizations have expertise in supporting elections, mediation and national dialogues; assisting rule of law and security sector reform; advising judicial and constitutional reform processes; as well as in designing economic and trade policies,” he noted.

“Let us pool those strengths in the months ahead,” he said.

Turning to other security challenges faced by the OSCE region, the Secretary-General said that long-standing tensions in the South Caucasus, the impact of the transition in Afghanistan on Central Asia, the radicalization of youth and the threat of terrorism were all concerns that must be addressed in order to promote long-term development in the region, which was part of the shared objective between the UN and the OSCE of improving people’s lives.

Moreover, the OSCE, with its long-standing experience, can and should play an active role in shaping the debate regarding the post-2015 sustainable development framework, the Secretary-General said.

Highlighting examples of information exchange between the UN and the OSCE, the Secretary-General underscored the need to look within the two organizations to ensure they were equipped to tackle the challenges of the 21st century.

“We must do more to combat discrimination and marginalization, including of minority groups, which is indispensable to the pluralistic, tolerant and progressive societies we want,” Mr. Ban said.

“The United Nations counts on the OSCE to help lead this vast region to greater security and cooperation which, in turn will help lead our world to greater peace, development and human rights,” he added.

♦ Receive daily updates directly in your inbox - Subscribe here to a topic.
♦ Download the UN News app for your iOS or Android devices.
osce

Cooperation between UN and OSCE stronger than ever, says Ban Ki-moon 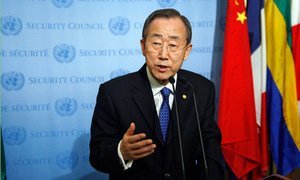