“Winter is here, and in many parts of the country displaced populations are already being hit with heavy rains, winds, storms and low temperatures,” Jacqueline Badcock, the Deputy Special Representative of the Secretary-General for Iraq, said in a press release.

Ms. Badcock’s warning accompanies an appeal launched by the UN Office for the Coordination of Humanitarian Affairs (OCHA) and calling for $173.1 million to address “the immediate needs” of an estimated 1.26 million IDPs.

Over the past several months, Iraq has been convulsed by increasing instability amid an ongoing offensive by the Islamic State in Iraq and the Levant (ISIL), unleashing wave after wave of internally displaced persons and refugees.

Since January 2014, an estimated 1.9 million people have been displaced across Iraq as they fled the violence and persecution of ISIL’s recent offensives. According to OCHA, close to 50 per cent of the displaced have found refuge in the high altitude areas of Iraq’s Kurdistan Region, where winter temperatures can plummet to well-below zero.

Meanwhile, hundreds of thousands have found temporary shelter in unfinished buildings, informal settlements, or overwhelmed public structures, as well as in the open air.

OCHA notes that of the total requested amount, $46.3 million is needed for “shelter and related items” while $70.2 million is urgently needed for food. Without that funding, the agency warned, food assistance could “abruptly stop after January 2015.”

“Unless funds are forthcoming, the 1.8 million people currently being target for food assistance will not get the assistance they need,” Ms. Badcock cautioned.

The current OCHA appeal comes amid a worsening humanitarian situation across Iraq, affecting some 5.2 million Iraqis, and falls under a more comprehensive humanitarian ask of $2.2 billion envisioned in the UN agency’s updated Strategic Response Plan (SRP). 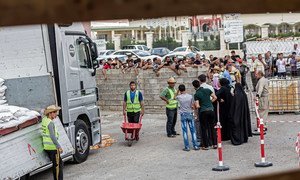 As winter closes in, UN launches humanitarian appeal for Iraqis in need

An estimated 2.8 million Iraqis lack food assistance while another 800,000 are in urgent need of emergency shelter, the United Nations Office for the Coordination of Humanitarian Affairs (OCHA) warned today as it launched an appeal for greater financial support to bolster its operations on the ground.